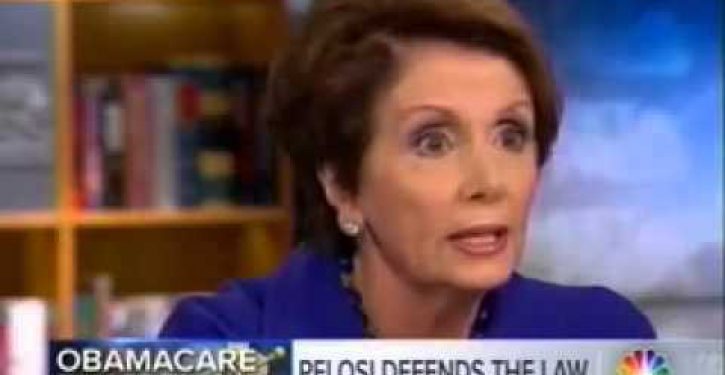 If you’re the sort of person who hates it when other drivers stop to rubberneck at the scene of an accident, you may want to hit the gas and move on to the next column. The ten-car pileup on the road ahead is pretty gruesome.

Nancy Pelosi, onetime Speaker of the House and, as “Meet the Press” host David Gregory acknowledges, architect of Obamacare, is pinned beneath the wreckage of her own words. She attempts futilely to free herself, even after Gregory plays a video for her in which she clearly states:

What we are talking about is affordable, quality, accessible health care for all Americans. It’s about choice. If you like what you have and you want to keep it, you have the choice to do that. [Emphasis added]

Weasel Zippers observes that the exchange would be “completely hilarious, if it were not that this woman is the Minority Leader.” LU respectfully disagrees. Pelosi’s ingratiating manner and unwillingness to man up to her own fiction are disgraceful. So is her lame defense of Barack Obama, who currently struggles to extricate himself from the same wreckage.

Granted, for the first four-and-a-half years of the Obama presidency, Pelosi and her ilk could count on cover from the mainstream media, knowing that on shows like this, the questions they received would all be softballs. Now, however, the president and Pelosi have been caught lying. They and other Democrats have violated the trust of the American people. They are going to have own up to their fabrications.