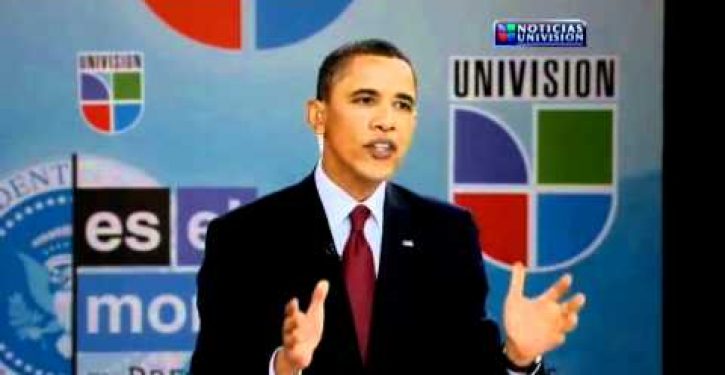 Perhaps the most egregious example of President Obama’s hypocrisy is his handling of the immigration fiasco. Lately he’s been threatening to issue executive orders on this issue, but three years ago he repeatedly said such an act was unconstitutional and therefore beyond his power.

While campaigning in 2008, then-Sen. Obama said he considered immigration reform to be a “top priority,” and he promised to tackle it during his first year as president, according to BuzzFeed.

Indeed, that would have been the time to do it — Obama’s party had both chambers of Congress during the first two years of his presidency, until the 2010 “shellacking.” But he didn’t bother acting on it then.

Beginning in 2011, and as late as September of 2013, he was repeatedly asked how and when he was going to finally address the issue as he had promised he would in 2008.

On March 28, 2011, at a Univision town hall meeting, he was asked why he couldn’t grant at a minimum “temporary protective status to undocumented students” who had arrived here illegally. Here was his response:

With respect to the notion that I can just suspend deportations through executive order, that’s just not the case. There are enough laws on the books by Congress that are very clear in terms of how we have to enforce our immigration system that for me to simply through executive order ignore those congressional mandates would not conform with my appropriate role as President.

Watch the exchange via National Review.

The issue came up again at an “Open for Questions” Hispanic Roundtable held Sept. 28, 2011:

I just have to continue to say this notion that somehow I can just change the laws unilaterally is just not true. We are doing everything we can administratively. But the fact of the matter is there are laws on the books that I have to enforce. And I think there’s been a great disservice done to the cause of getting the DREAM Act passed and getting comprehensive immigration passed by perpetrating the notion that somehow, by myself, I can go and do these things. It’s just not true.

He went on to say he felt he could “prioritize enforcement,” which is to say, simply not enforce the law.

“But we live in a democracy,” he added. “You have to pass bills through the legislature, and then I can sign it.”

Here’s the entire Hispanic roundtable via the White House. The specific question and answer begins at the 25:30 min:sec mark.

Two years later, an immigration activist had had enough. He repeatedly heckle Obama during a Nov. 25, 2013 speech until the president answered him directly.

“If, in fact, I could solve all these problems without passing them through Congress, I would do so,” he said. “But we’re also a nation of laws.”

Here’s a clip of the incident, via National Review.

However, since at least June 30, 2014, Obama vowed to employ his phone and pen in “a new effort to fix as much of our immigration system as I can on my own, without Congress,” according to CNN.

I guess the “Constitutional lawyer in the White House” had a change of heart.

The Obama Doctrine in action
Next Post
Which demographic group would be harmed most if Obama gave amnesty to illegals?