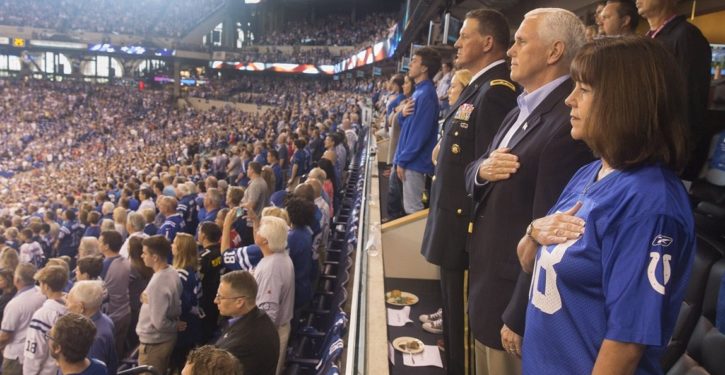 Vice President Mike Pence and Karen Pence were attending an NFL game in their home state of Indiana on Sunday, for which the San Francisco 49ers were in town to play the Indianapolis Colts.  From the pictures that follow the Veep wherever he goes, it looks like all was going well.  See, for example, the nice photo of the Second Couple standing for the national anthem.

We were proud to stand – with all our @Colts – for our soldiers, our flag, and our National Anthem ???????? pic.twitter.com/mkZiKMkPDD

But apparently some players on the San Francisco side took a knee for the anthem.  So Mike and Karen Pence left the game.

A tweet series ensued, in which VP Pence explained his unscheduled departure:

Pence later posted a statement which read, “I left today’s Colts game because President Trump and I will not dignify any event that disrespects our soldiers, our Flag, or our National Anthem. At a time when so many Americans are inspiring our nation with their courage, resolve, and resilience, now, more than ever, we should rally around our Flag and everything that unites us.”

I left today's Colts game because @POTUS and I will not dignify any event that disrespects our soldiers, our Flag, or our National Anthem.

At a time when so many Americans are inspiring our nation with their courage, resolve, and resilience…

…now, more than ever, we should rally around our Flag and everything that unites us…

While everyone is entitled to their own opinions, I don't think it's too much to ask NFL players to respect the Flag and our National Anthem

Shortly thereafter, President Trump chimed in to clarify that it was his fault:

I asked @VP Pence to leave stadium if any players kneeled, disrespecting our country. I am proud of him and @SecondLady Karen.

Interestingly, the Fox News story goes on to update us on the aspirations of Colin Kaepernick, who reportedly is “working out privately” in New Jersey and hopes to sign with a team this season.  It is also being reported that he plans to stand for the national anthem if he has the opportunity again.

I don’t wish Kaepernick any ill, but I am, as the kids (used to) say, over him at this point.  We’re beyond Kaepernick now.  Reality has moved on: the NFL has lost 2.5 million viewers, in just one month, not because of “Kaepernick,” but because of the NFL and its own cynical dithering.

Whether it’s the owners being uncertain what they should do, when the choices are “show respect for America” or “appease the radical left,” or the players linking arms — whether they “agree” or not — to show solidarity with donating to radical left political causes, while protesting America and dissing Americans as “racists,” the whole thing is such an ugly modern-progressive morality play that no one can stand to look at it anymore.  It’s supposed to be football, for crying out loud.  That’s what people thought they were signing up for.

At a certain point, you have to commit your mind — not just focus it, but commit it — to what’s good, positive, and right.  The NFL has chosen the wrong side of that, by trying to have it both ways.  That’s very sad for us lifelong pro football fans.  But the choice, when we’re faced with it, is not even a question.

So, good on Vice President and Mrs. Pence.  This isn’t the end.  It’s the end of something, but what we’ll come out with will be better.  And thank you to VP Pence for articulating the positive reasons for respecting our national symbols.  Respecting our anthem and our flag is respecting the American people, and the God-given idea of liberty that lives in our hearts. 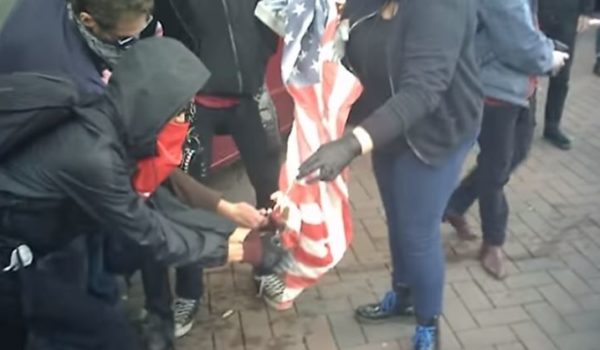