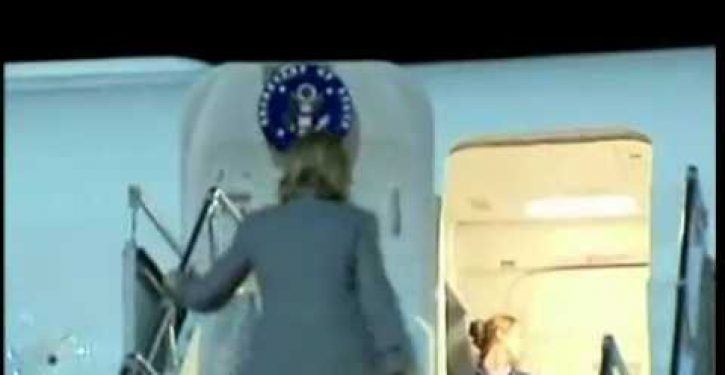 Yesterday, I wrote about the monumental task climbing a flight of stairs posed for Democratic nominee for president Hillary Clinton. In the 24 hours since that post went live, additional evidence has poured in suggesting that Mrs. Clinton’s health problems — especially in the area of balance — make her capacity to serve as president highly questionable.

First off is another image of her mounting the stairs to her D.C. home. The picture was snapped earlier than the one featured in yesterday’s post and provides an even more dramatic glimpse of how seriously the former secretary of state struggles as she ascends a simple flight of steps.

These physical difficulties seem to hark back to a concussion that she sustained in a fall in 2012 when she fainted at home and fell, striking her head. A New York Times article from early January 2013 notes that the State Department explained that the fainting was caused by dehydration, brought on in turn by a stomach virus. But the article also notes that Clinton was hospitalized for a blood clot in a vein in her head around this time.

That explanation for her recent struggles might seem complete if it weren’t for this damning video shot a year earlier — long before the stomach virus and ensuing cascade of problems that led to her fall. In the footage, she is captured boarding a government jet. Notice how laboriously she mounts the steps.

But the real telling portion of the video comes around 0:22 when she finally enters the cabin … and falls!

Some will claim that she tripped. Fine. Did she also trip in 2009 when she slipped and broke her elbow on the way into the White House for a meeting? Granted, Washington winters get cold, but you can’t blame the ice for her fall in this case, because the meeting was in June.

As I noted yesterday, Team Clinton could easily put the kibosh on all this speculation about her physical condition by releasing Hillary Clinton’s medical records. Yet, they stubbornly refuse. Is that because she has something to hide?