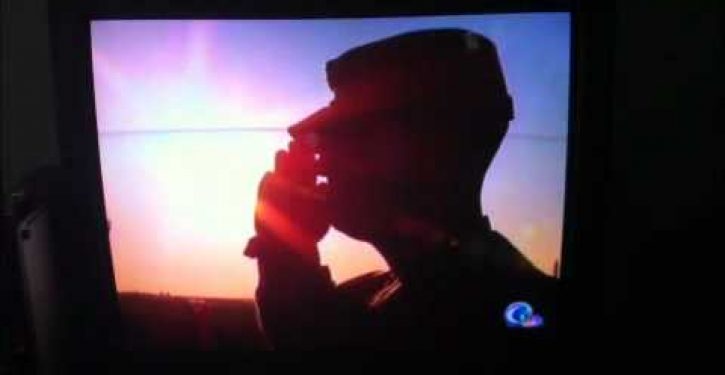 NBC unveiled a series of promotion spots for its new dramatic series titled, “Allegiance.” In one, the Pledge of Allegiance can be heard in a voiceover while the scene is being played.

The only problem is, it’s recited as “One nation, indivisible,” omitting the phrase “under God.”

Making their error even more egregious is that this isn’t a first for NBC.

It pulled the same stunt in 2011 when it twice ran a promotion for its coverage of the U.S. Open. That clip depicted a group of schoolchildren reciting the pledge — minus God.

Social media erupted in anger toward NBC after that slip-up, and network commentator Dan Hicks offered this on-air apology, according to The Huffington Post:

We began our coverage of this final round just about three hours ago and when we did it was our intent to begin the coverage of this U.S. Open Championship with a feature that captured the patriotism of our national championship being held in our nation’s capital for the third time. Regrettably, a portion of the Pledge of Allegiance that was in that feature was edited out. It was not done to upset anyone and we’d like to apologize to those of you who were offended by it.

Here’s a video of that first SNAFU. Story continues after video.

NBC’s new series, “Allegiance,” is about a CIA analyst whose world starts unraveling when he learns that his parents are former Soviet KGB agents. Here’s one of the promos for that series, which again, omits the phrase “under God” in the pledge. Story continues after clip.

Because the network committed the same error before, apologized after being roundly criticized for it, then did it again, pretty well suggests it wasn’t an error at all, but rather done intentionally with what lawyers call malice aforethought.