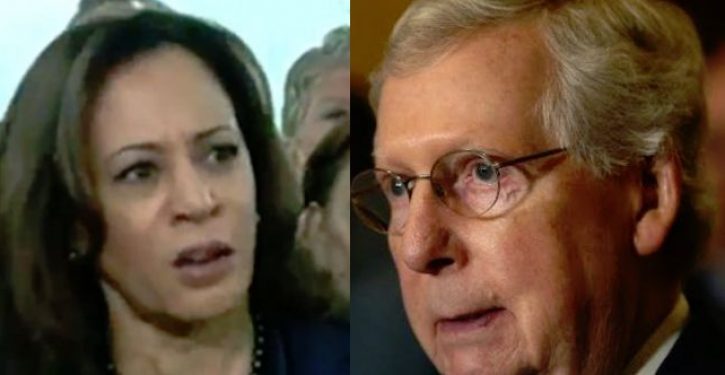 How convenient: On Monday, NBC News dropped a bombshell with its report that Sen. Mitch McConnell is a direct descendant of two slave owners in his family line.

The timing couldn’t have been more perfect if the network had gone to great lengths to plan it — which appears to be the case.

The report is a double-edged sword, first because the topic of reparations for slavery is back in the headlines, and McConnell has long been an opponent of the policy. In June, according to The Washington Post, the Senate majority leader told a House committee holding hearings on the matter:

I don’t think reparations for something that happened 150 years ago, when none of us currently living are responsible, is a good idea. We’ve tried to deal with our original sin of slavery by fighting a civil war, by passing landmark civil rights legislation. We’ve elected an African American president.

Another benefit of revealing this seeming skeleton in McConnell’s closet at this time is that it further weakens him against a strong Democratic contender for his Senate seat in former Marine fighter pilot Amy McGrath, who has pledged to “drain the swamp,” identifying McConnell as a swamp creature.

But just when the Left’s ducks appeared to be in a row, a second, even larger, bombshell dropped. An ancestral summary compiled by Harris’s father, Donald Harris, a Stanford University economics professor, includes this passage:

My roots go back, within my lifetime, to my paternal grandmother Miss Chrishy (née Christiana Brown, descendant of Hamilton Brown who is on record as plantation and slave owner and founder of Brown’s Town) and to my maternal grandmother Miss Iris (née Iris Finegan, farmer and educator, from Aenon Town and Inverness, ancestry unknown to me).

The “fact-checking” website Snopes maintains that the claim that Harris descended from slave is “unproven,” an assertion that it attempts to back up with the unpersuasive argument that Hamilton Brown was “a steadfast slavery apologist.”