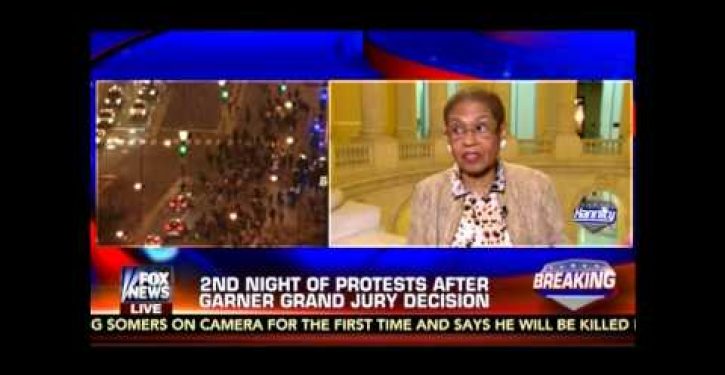 Some people don’t see the forest for the trees, but Rep. Eleanor Holmes Norton (D-D.C.) has the reverse problem. As TheBlaze notes, the chair of the Congressional Black Caucus was on Sean Hannity’s show on the Fox News Channel last night to discuss the problem of police violence against black males.

When the host asked whether Norton had read the evidence in the case of 18-year-old Michael Brown, who was shot by former Ferguson, Mo., police officer Darren Wilson, she admitted, remarkably, “I did not, and that is not a concern.”

A stunned Hannity asked in disbelief, “The evidence isn’t a concern? What?!”

Norton went on to claim that the Brown shooting and the officer-involved killing of Eric Garner in New York City has revealed a “much larger concern.”

“These are words that you are saying. You have a position of power,” Hannity pressed, asking Norton why she won’t read the evidence in the Brown case.

“I’m sorry, if you want to talk about something that other people said, you can. This is my view,” Norton replied. “We are losing the big picture.”

Here is the back-and-forth:

How can you possibly address the “big picture” — which in Holmes’s words is “how police and African-Americans” can improve relations — without having at least an awareness, if not an intimate knowledge, of the facts in the cases?

Norton is not the only commenter on these shootings who prefers to use a broad brush. In an item in the current New Yorker glibly titled “No such thing as racial profiling,” Jelani Cobb refers in passing to the 2006 NYPD shooting of Sean Bell as another example of what some are calling “an open season on black males.”

The Bell case bears no similarity to the Garner case and is similar to the case of Michael Brown in a single detail: both men were unarmed at the time of their deaths. Bell, however, had a record of multiple arrests and was overheard on the night of the deadly shooting by undercover cops to say “Yo, get my gun” as he and two companions exited a Queens nightclub. When police sought to question him, moreover, he tried to run one of them over with his car in failed getaway attempt.

If Cobb and Norton choose to ignore the details and focus only the big picture, they do so at pain of being written off as unserious.

Cartoon of the Day: Regs putting a drag on Christams
Next Post
Rolling Stone: Oops, our trust in sensational UVA rape story was ‘misplaced’