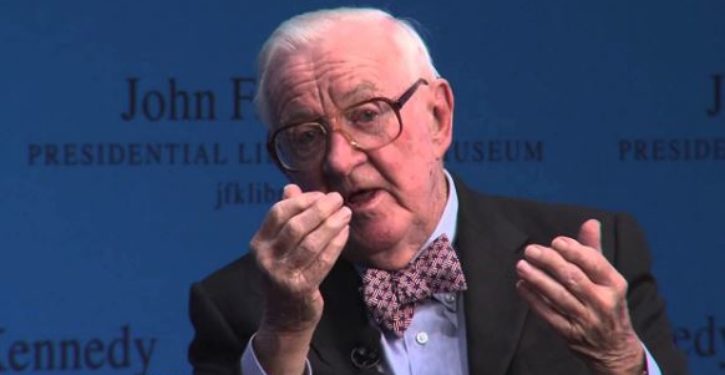 In an op-ed published in Tuesday’s New York Times, former Supreme Court Justice John Paul Stevens called for a repeal of the Second Amendment right to keep and bear arms in order to “make our schoolchildren safer. …”

“Rarely in my lifetime have I seen the type of civic engagement schoolchildren and their supporters demonstrated in Washington and other major cities throughout the country this past Saturday. These demonstrations demand our respect. They reveal the broad public support for legislation to minimize the risk of mass killings of schoolchildren and others in our society,” he began.

That support is a clear sign to lawmakers to enact legislation prohibiting civilian ownership of semiautomatic weapons, increasing the minimum age to buy a gun from 18 to 21 years old, and establishing more comprehensive background checks on all purchasers of firearms. But the demonstrators should seek more effective and more lasting reform. They should demand a repeal of the Second Amendment.

Concern that a national standing army might pose a threat to the security of the separate states led to the adoption of that amendment, which provides that “a well regulated militia, being necessary to the security of a free state, the right of the people to keep and bear arms, shall not be infringed.” Today that concern is a relic of the 18th century.

For over 200 years after the adoption of the Second Amendment, it was uniformly understood as not placing any limit on either federal or state authority to enact gun control legislation. In 1939 the Supreme Court  unanimously held that Congress could prohibit the possession of a sawed-off shotgun because that weapon had no reasonable relation to the preservation or efficiency of a “well regulated militia.”

After attacking the NRA and touting his anti-gun creds as “among the four dissenters” in the District of Columbia v. Heller case, which established the individual’s Constitutional right to bear arms, Stevens suggested scrapping the Second Amendment completely.

“Overturning that decision via a constitutional amendment to get rid of the Second Amendment would be simple and would do more to weaken the N.R.A.’s ability to stymie legislative debate and block constructive gun control legislation than any other available option,” he said.

“That simple but dramatic action would move Saturday’s marchers closer to their objective than any other possible reform. It would eliminate the only legal rule that protects sellers of firearms in the United States — unlike every other market in the world. It would make our schoolchildren safer than they have been since 2008 and honor the memories of the many, indeed far too many, victims of recent gun violence,” he concluded.

In short, Stevens thinks the answer to gun crime is to strip Americans of a dearly held constitutional right.

His thesis didn’t sit too well with many on Twitter.

The NYT is calling for us to "Repeal the Second Amendment" this morning.

If liberals want to eliminate guns so badly, why not start with themselves? They should ban all registered Democrats from owning guns. They commit most mass shootings anyway.#TuesdayThoughts #MorningJoe

"Repeal the Second Amendment" Well they are showing us the very reason why we have it.

Some, however, agreed with Stevens. This Twitter user, for example, actually suggested that anyone opposed to repealing the Second Amendment actually stands in opposition to the Constitution:

The Second Amendment says that the people have the right to "a well regulated" militia.

Gun violence in this country proves we aren't well regulated. Those against change are against the Constitution.

We don't need to repeal the Second Amendment. We need them to understand it.

Actually, that’s not what the Second Amendment says.

If Republicans were smart, they would run ads of all these Democrats demanding that we repeal the Second Amendment.

I cannot think of a better way to motivate patriots to vote in November.#TuesdayThoughts

As for Stevens, if he is going to cite the “civic engagement schoolchildren and their supporters demonstrated in Washington” as grounds for a repeal of the Second Amendment, he should least get his facts straight. David Hogg, the de facto leader of the Saturday’s “March for Our Lives,” has state unequivocally that he supports the Second Amendment:

Of course that’s as of Sunday. It’s a safe bet that when young Hogg gets wind of Stevens’s op-ed, he will begin dropping f-bombs all over 2A.

CNN’s Stelter admits he let David Hogg get away with lies about guns, NRA
Next Post
Former professional clown running for Congress in South Carolina