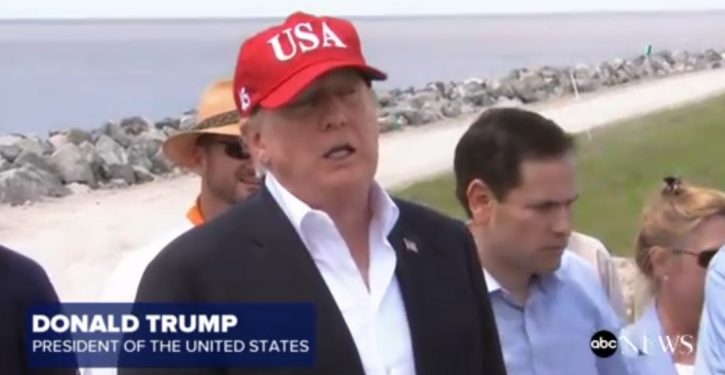 Either number meant Trump’s victory was a GOP anomaly since the candidate did not need Florida’s 29 votes to reach the 270 minimum to win the election.

For context, let’s go back to November 2004. George W. Bush — the last Republican president to be reelected — would have lost if Florida’s then-27 electoral votes were not included in his 286-251 victory over his Democratic opponent, then-Massachusetts Sen. John Kerry.

Moreover, in 2000, Florida starred in the most dramatic election debacle in modern U.S. history. The drama culminated in a Bush v. Gore Supreme Court decision awarding the Sunshine State’s then-25 electoral votes to the Texas governor — and with it, the presidency. The final score was Bush 271, Gore 266.

For Trump, Florida’s 29 votes were just a decorative wall trophy in 2016 after unexpectedly breaching the three traditional Democratic “blue wall” states — Michigan, Pennsylvania, and Wisconsin — with a combined total of 46 electoral votes. However, in 2020, chances are decreasing that red lightning will successfully strike the blue wall for a second time. Thus, Florida’s 29 votes resume their “must win” role for the GOP to keep the White House.

However, Florida’s essential role in GOP 270 math assumes Texas, with its mother lode of 38 electoral votes, remains red. Currently, the RealClearPolitics poll average shows Trump and Joe Biden tied within the margin of error and Texas a “Battleground State.”

If Texas were to turn blue, it would be a political earthquake. A loss crumbles the GOP’s solid-red bulwark in Texas, the party’s crown jewel since 1980. In the unlikely chance that happens, Florida probably goes blue as well. But if Trump loses Texas, yet still manages to win Florida’s 29 votes, it is doubtful he could reach 270.

Back in Florida, the latest RCP poll average shows Biden leading the president but also tied within the margin of error.

In a November 2018 RealClearPolitics piece, I chronicled how Florida’s midterm results and exit polls indicated that Team Trump in 2020 would have a tougher time winning the state’s 29 electoral votes.

So how goes this brutal, high-stakes battle for Florida? As a resident Republican, I offered up some questions to a state GOP official who spoke on condition of anonymity.

Response: NERVOUS is the wrong word to use. The Trump campaign is confident that all of the hard work — which has been and is ongoing by paid staff and thousands of volunteers in Florida, including voter contacts, voter registration, and grassroots activism — will pay off in November, resulting in a bigger margin of victory in Florida for President Trump than in 2016.

MA: As a party official, what pressure or messages are you receiving from the Republican National Committee in D.C.?

Response: We never get “pressure”! We receive messaging information and suggested talking points to carry and reinforce the message of the successes of the Trump administration, including the economy, foreign affairs, religious freedom, border security, and jobs, all designed to keep America great again.

MA: Are the messages different from the Trump campaign?

Response: The messages are the same. The RNC and the Trump campaign are both on the same page and have been since President Trump became the official nominee in 2016.

MA: Are you concerned about how Florida’s troubled unemployment-benefits application site has caused political problems? Will that impact Trump’s reelection prospects since Gov. DeSantis is the president’s faithful surrogate? (For readers unfamiliar with this ongoing issue, here are two recent headlines):

“Unemployment woes a mounting strain on Trump in Florida”

Response: The unemployment office woes are a state issue. The Trump 2020 campaign has no involvement in this.

MA: The latest Florida polls show Biden defeating Trump. As a general rule and perhaps a security blanket, Republicans love to say, “Ask President Hillary about the 2016 polls,” while dismissing polls not favorable to Trump. Is that still the RNC thinking in Florida?

Response: I will not discuss polls in general. I will discuss a specific poll if I have the following information: A) How large is the sample? B) Did the sample take opinions of “adults” or “registered voters” or “likely voters”? and C) What was the party registration of the sample: percent Democrats, percent Republicans, and percent Not Politically Affiliated?

MA: It is known that Trump’s problem with women voters has worsened since the 2018 midterm elections. What are the GOP and Trump specifically doing to win Florida women?

Response: That is proprietary campaign strategy, not for public consumption.

MA: Let’s say I am an independent suburban woman who voted for Trump in 2016, but now undecided because I am sick of all the Twitter drama and division that I think he has caused. Can you give me the RNC pitch as to why I should vote for him again?

Response: First, the RNC “messages” — it does not “pitch.” Second, the RNC message is the same as the Trump campaign. Here are a few examples:

Response: I will be an elector if chosen by RPOF [Republican Party of Florida] Chairman Joe Gruters.

MA: Although it is still “early” in the election cycle, do you see Trump’s Florida trendline going up or down?

Response: With the introduction of unforeseen events like the Chinese Virus and the unbridled rioting and looting taking place around the country, “trends” are pure speculation at this point.

MA: Thanks for taking the time to respond.

Late Thursday evening, the RNC announced its strategic decision to host the large-crowd portion of the party’s nominating convention in Jacksonville rather than original host city Charlotte, N.C. RNC Chairwoman Ronna McDaniel said, “Not only does Florida hold a special place in President Trump’s heart as his home state, but it is crucial in the path to victory in 2020.”

“Crucial” is an understatement.