The FBI states it will not expedite the release of documents about secret meetings between FBI Director James Comey and former President Barack Obama, according to a letter the bureau sent to The Daily Caller News Foundation.

Such information is not “a matter of widespread and exceptional media interest in which there exists possible questions about the government’s integrity which affects public confidence,” David Hardy, the Section Chief for the bureau’s Record/Information Dissemination Section, told TheDCNF in a Feb. 26 letter.

TheDCNF, under the Freedom of Information Act (FOIA), requested records of all meetings between Comey and Obama and sought an “expedited process” as provided under the act when issues are of great interest to the media and the records address issues pertaining to government integrity. TheDCNF FOIA request was filed Feb. 16, 2018.

The issue prompting the FOIA request was the disclosure that Comey held a secret Oval Office meeting with Obama on Jan. 5, 2017. Comey never divulged the meeting to Congress.

The National Archives revealed the existence of the meeting and released a declassified version of an email Rice sent to the Senate Committee on the Judiciary. Rice wrote an email to herself about the secret Jan. 5 meeting with Comey on Inauguration Day Jan. 20, 2017, as President Donald Trump was being sworn into office. The email suggested Comey may have misled Congress and was attempting to cover up the extent of his relationship with Obama.

The FBI just told us that Director James Comey potentially lying to Congress should not be of interest to us, that it doesn’t speak to their ‘integrity,’ and that it shouldn’t impact America’s ‘confidence.’ They said this with a straight face. We disagree, we think the American people disagree, and we think it’s absolutely shameful.

Republican Sens. Chuck Grassley, chairman of the Senate Judiciary Committee and subcommittee chairman, and Lindsey Graham released the Rice email after they received it from the National Archives.

“President Obama had a brief follow-on conversation with FBI Director Comey and Deputy Attorney General Sally Yates in the Oval Office,” Rice stated in the email on Jan. 5.

The President urged Comey to proceed “by the book” on the Russian investigation, according to Rice.

Grassley of Iowa and Graham of South Carolina wrote to Rice in a Feb. 8 letter saying: the email seemed “odd” to them.

It strikes us as odd that, among your activities in the final moments on the final day of the Obama administration, you would feel the need to send yourself such an unusual email purporting to document a conversation involving President Obama.

Comey claimed in June 8, 2017, testimony before the Senate Select Committee on Intelligence he had only two face-to-face meetings with the president in which they were alone.

“I spoke alone with President Obama twice in person (and never on the phone) – once in 2015 to discuss law enforcement policy issues and a second time, briefly, for him to say goodbye in late 2016,” Comey’s opening statement read.

The qualifier that he had meetings with Obama “alone” permitted the former director to suggest he only met with the former president on two occasions.

TheDCNF filed its FOIA request before the bureau “seeking records that identify and describe all meetings between former FBI Director James Comey and President Barack Obama. This records request is for all meetings with President Obama alone or with meetings with the President in the company of other administration officials.”

TheDCNF requested records to include all Comey “logs, director appointment schedules, emails and memos outlining the meetings with the former President along with administration officials,” adding, the records “should list the date of the meeting, location, topic and meeting participants.”

TheDCNF stated it sought an “expedited request” for producing the records.

“The issue of Director Comey’s meetings with President Obama is a key troubling issue for Senate Judiciary Chairman Chuck Grassley,” TheDCNF wrote in its application for the expedited processing. TheDCNF attached to Grassly-Graham letter to Rice in the FOIA request for expediting handling.

Hardy said TheDCNF failed to meet its standards for expedited processing as provided under 28 CFR 16.5 (e)(1)(iv).

“You have not provided enough information concerning the statutory requirements permitting expedition: therefore your request is denied,” he told TheDCNF. 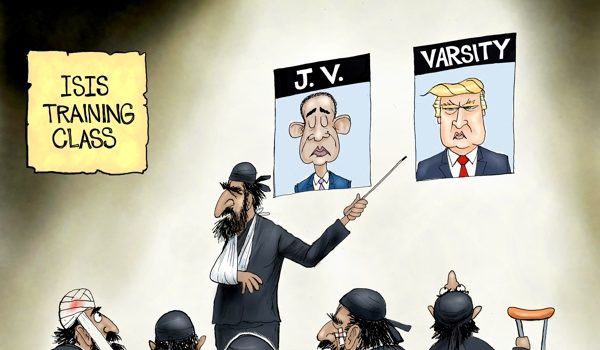 Cartoon of the Day: Back to school
Next Post
Study purports to find bacon linked to cancer