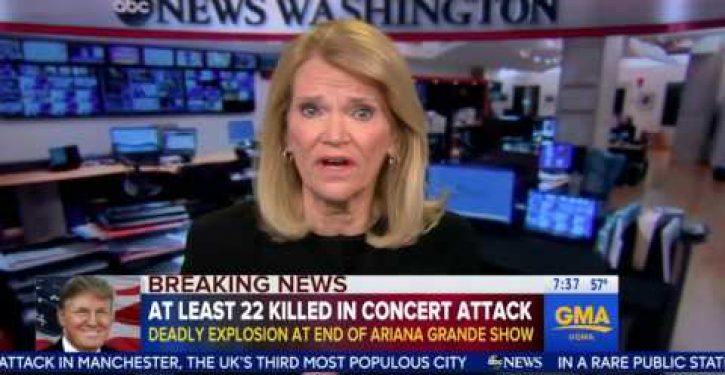 The party controlling the White House may have changed as a result of the last election, but the so-called mainstream media remain as firmly committed to promoting a liberal Democratic agenda as ever. Many acid tests have occurred since last November to bear this out, with the latest being the reaction to Monday’s terrorist attacks in the UK.

In a segment last night on CNN, a commentator opined that the bombing of an Ariana Grande concert in Manchester, England, was a legitimate act of Islamic terrorism but scarcely missed a beat before adding that it could have been a false flag plot by right-wing extremists.

A similar theme was sounded on ABC Tuesday morning. In a discussion of the attacks with correspondent Martha Raddatz, anchor George Stephanopoulos expressed concerns that the bombings are “likely to inflame anti-Islamic sentiment” across the UK and the rest of Europe.

It sure could, George. Manchester itself is a very multicultural city. There’s a large Muslim population with many there for generations. So headscarfs attract little attention there. And notably, Manchester did not vote in favor of Brexit. But an attack like this, as you said, is much bigger than Manchester itself and will likely create backlash, depending on the details of this attack.

Watch the exchange for yourself:

On Monday, meanwhile, MSNBC’s Chris Matthews was evidently so concerned over the Islamophobic backlash that was sure to follow that he broke into the developing story of the terrorist bombings to share months-old anti-Trump gossip.

Since then, new details of the bomber and his motives have been unearthed. And sure enough the attacker — 22-year-old Salman Ramadan Abedi — is a Muslim with links to ISIS and is believed to have been a “mule” for the terror group. The BBC notes further that Abedi was in Manchester earlier this year, where he spoke of the value of dying for a cause and made hard-line statements about suicide operations and the conflict in his native Libya.

It is also worth noting that in the days since the attack there have been no revenge plots leveled against “innocent Muslims.”