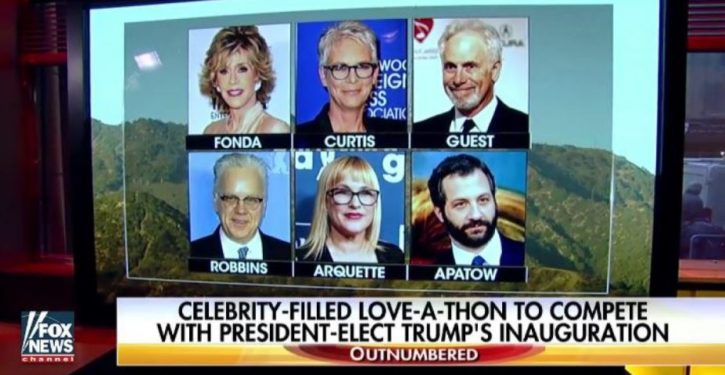 A group of very sad, very pathetic Hollywood celebrities are holding a telethon opposite President-elect Donald Trump’s inauguration, hoping to take the focus off of his presidency and place it on their progressive causes.

The event has been dubbed a “Love-a-Thon” because organizers apparently have the mentality of a 5-year-old.

The group running the Love-a-Thon hopes to raise a minimum of $500,000 to support such causes as an environmental organization known as Earth Justice, abortion mills, and Planned Parenthood. Nothing quite says ‘love-a-thon’ like raising money for an organization that sells body parts from aborted babies.

The man behind the love fest is Alex Godin, a 23-year-old tech entrepreneur, who said “I woke up like a lot of Americans feeling pretty crappy on November 10.”

As such, he decided he needed a hug, a safety pin, and a safe space to avoid the reality of a world without Barack Obama or a reasonable facsimile thereof. As did all of these Hollywood actors. Hence ‘Love-a-Thon.’

No wonder Bristol Palin is blasting celebrities for being a bunch of sissies.