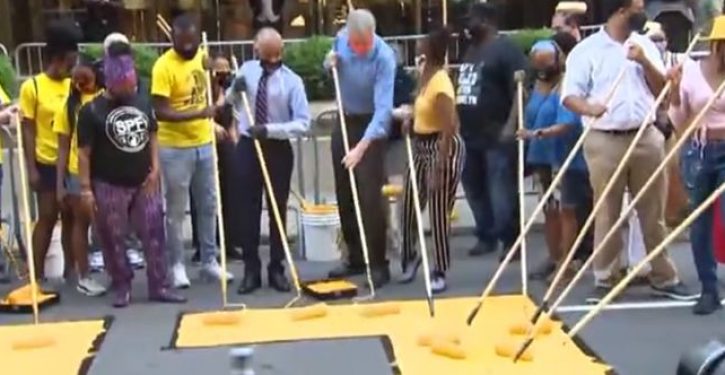 With New York City Department of Transportation painters receiving approximately $294 per day, Bill de Blasio’s  misappropriation of taxpayer funds doesn’t begin to approach in severity the crime committed by his wife, who “misplaced” $850 million entrusted to her for a mental health project.

Nevertheless, Big Apple residents are soaked enough by the city come tax time to have a legitimate grievance against the mayor.

His crime was the outgrowth of another crime: his defacement of public property. Last week, de Blasio personally helped paint a gigantic Black Lives Matter slogan in yellow letters in front of Trump Tower. (RELATED: NYC Mayor Bill de Blasio thinks painting a slogan on a street is ‘taking action’)

a. No person shall write, paint or draw any inscription, figure or mark or affix, attach or place by whatever means a sticker or decal of any type on any public or private building or other structure or any other real or personal property owned, operated or maintained by a public benefit corporation, the city of New York or any agency or instrumentality thereof or by any person, firm, or corporation, or any personal property maintained on a city street or other city-owned property pursuant to a franchise, concession or revocable consent granted by the city, unless the express permission of the owner or operator of the property has been obtained.

The mayor displayed a blatant disregard for this statute by authorizing and participating in the defacement of a city street.

On Monday, CBS New York affiliate WLNY reported that an unidentified vandal had defaced the defacement by dumping red paint on it.

It was here that de Blasio committed his second crime by ordering employees of the Department of Transportation to go out to Fifth Avenue and repaint the mayor’s personal politically-motivated statement. He even boasted about the crime on Twitter:

To whoever vandalized our mural on 5th Avenue: nice try. @NYC_DOT has already fixed it.

The #BlackLivesMatter movement is more than words, and it can’t be undone. pic.twitter.com/nlYTALCWxJ

Here from the “About” section of the Department of Transpiration website is a thumbnail of the department’s jobs. Notice that none of jobs include painting politically-motivated slogans on city streets.

It would appear that de Blasio not only misused taxpayer money but abused a public service by asking employees of that service to perform tasks that run counter to the first two bullet points. The restoration of the Black Lives Matter slogan impeded the “responsible movement of … traffic on the streets,” thereby increasing, rather than “reduc[ing] congestion throughout the City.”

The mayor should be made to answer for his crimes.

Harmeet Dhillon wants to know where outrage was when Obama commuted sentence of a terrorist
Next Post
Cartoon of the Day: Corporate Money Matters 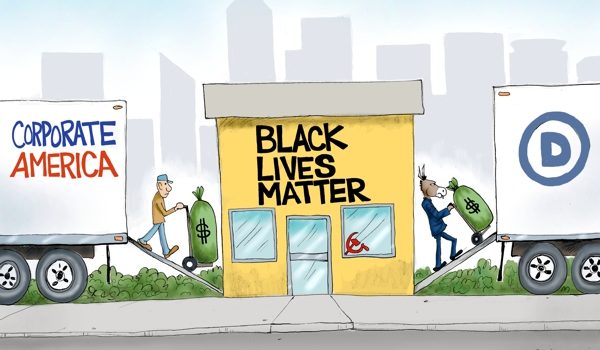