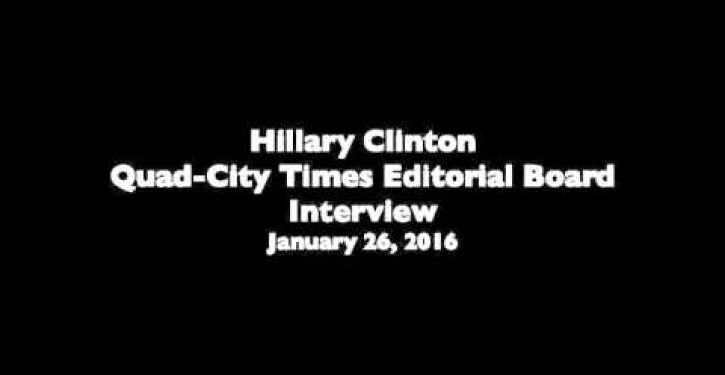 During an interview with the editorial board of the Quad-City Times, Hillary Clinton revealed her biggest regret in using a private email server to transmit classified date during her tenure at the State Department.

It wasn’t over putting classified data at risk, or hindering national security. It wasn’t even about breaking the law by instructing aides to strip classified markings from official documents.

No, Mrs. Clinton’s biggest regret … was getting caught.

Clinton told the editorial board that “it was a mistake” because “it’s caused all of this uproar and commotion.”

During an editorial board interview in Iowa yesterday, Secretary Clinton was again asked about her private email server. Reminded that she called using one device for work and personal email a “mistake” in the summer, Clinton was asked by the Quad-City Times editorial board why on Monday night during CNN’s town hall she refused to call using a private email a mistake.

QUAD-CITY TIMES ED BOARD: “So it was a mistake because of the reaction”

ED BOARD: “Not because it would have made sense to use a work email for work purposes?”

CLINTON: “It made sense – look, look – I know that this remains a subject of some interest, obviously. You’re asking me, they asked me last night. The facts have not changed. …”

To be clear: Clinton readily admitted that the only reason she said her email scandal was a mistake was because she got caught and the media fallout that ensued.

She also said her lack of judgment in using the private emails was a mistake because “who wants to put people through all of this? I don’t want to go through it.”

Clinton also added that risking national security is no more than an “unfounded diversion.”

Listen to the exchange below:

Nearly a year after we learned of her private email server, Secretary Clinton still does not have a good answer for why she risked national security by using a private email for government business. Dogged by bad headlines and slipping poll numbers, Clinton’s campaign is desperate to change the narrative ahead of next week’s caucuses.

Students at one university question retaining quote by who?
Next Post
Cartoon of the Day: Hillary BFF