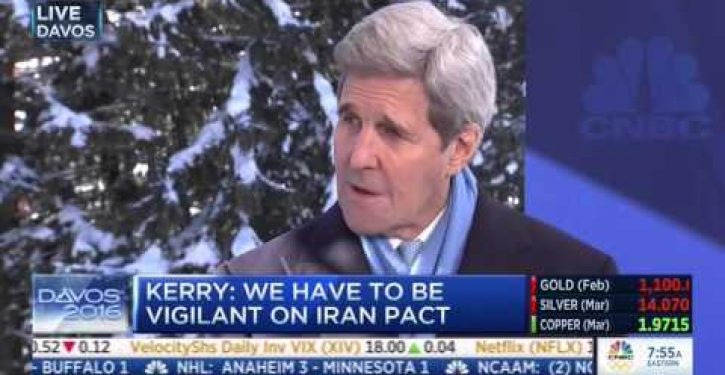 Could the $150 billion the Obama administration has agreed to unfreeze and restore to Iranian coffers as part of the Iran nuclear deal be used for terrorism?

Of course. That was painfully obvious all along.

It such an inescapable reality that yesterday, two spokesman for the administration openly conceded the point.

One of the two was Secretary of State [score]John Kerry[/score]. Appearing on CNBC, he freely conceded, “Some of it will end up in the hands of the IRGC or other entities, some of which are labeled terrorists.”

Kerry went on to reiterate that point, saying that while there is no evidence currently that funds have been attained by terrorists, “I’m sure at some point some of it will. You know, to some degree, I’m not going to sit here and tell you that every component of that can be prevented.”

Later in the day, White House Press Secretary Josh Earnest was asked about the statement and confirmed that it was “entirely likely” and “even expected” that Iran will continue to support terrorism:

“Kerry admitted what we suspected all along,” Priebus stated, noting that current Democratic front-runner Hillary Clinton, who has endorsed the deal, needs to “explain why she thinks an agreement that helps arm terrorists is such a diplomatic coup, especially when it makes America and our allies like Israel less safe.”

Calling it a “failed foreign policy,” Priebus reminded voters that nothing in the Obama/Clinton/Kerry agreement “ultimately prevents Iran from obtaining an atomic bomb.”