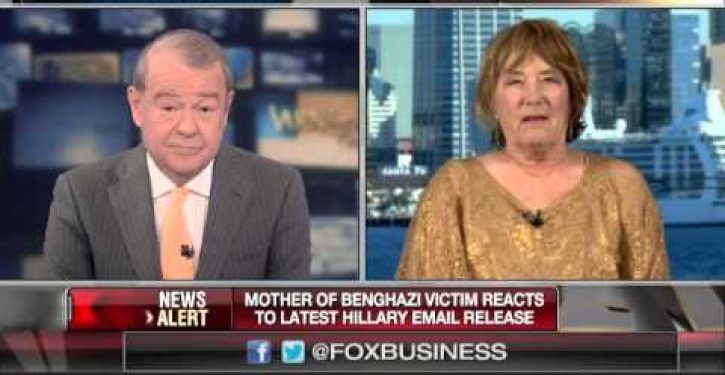 Hillary Clinton recently sat down with the editorial board of New Hampshire’s “Conway Daily Sun” to discuss the terrorist attacks in Benghazi and subsequent narrative pushed by the Obama administration that the assault, which killed the U.S. ambassador to Libya and three other Americans, was the result of an anti-Muslim YouTube video.

When presented with the claim by the families of all four victims that Clinton told them the deadly assault on the embassy was caused by the video, she effectively said they were lying.

Via the Conway Daily Sun:

“Somebody is lying,” said McLaughlin.”Who is it?

Clinton replied, “Not me, that’s all I can tell you.”

Clinton went on to assert that any confusion was due to the “fog of war” but her newest accusation seems to suggest it was the families who were confused, not her.

Woods’s father kept handwritten notes from his meeting with Clinton. Those notes read in part:

We are going to have the filmmaker arrested who was responsible for the death of your son.

When the Weekly Standard’s Stephen Hayes spoke with the elder Woods, he said “I remember those words: ‘who was responsible for the death of your son.’ She was blaming him and blaming the movie.”

After Clinton’s testimony before Congress earlier this year, Ingmire referred to her as a “serial liar” and “definitely incompetent.” He added that if Hillary isn’t complicit, “she’s definitely incompetent, and neither’s a personality trait [that] really belongs in the office of the president.”

Clinton also told the Conway Daily Sun that using Benghazi and the deaths of Americans for political purposes “dishonors them.”

It’s not their deaths that are being used for political purposes, but Clinton’s own deceit and efforts to conceal the truth.

WaPo: Racism driving the decision not to pay college athletes
Next Post
Cartoon of the Day: Party pooper