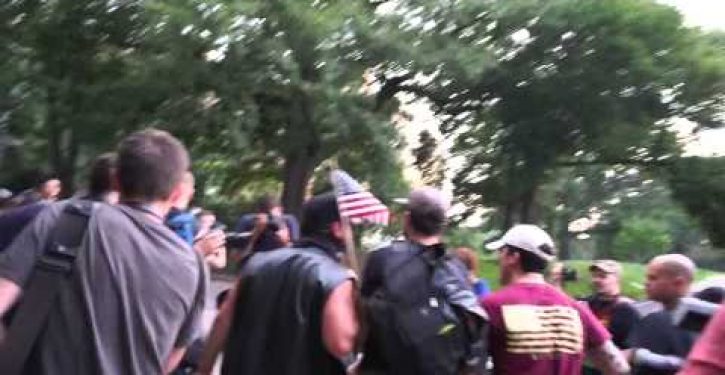 A group of anti-police activists showed up at Brooklyn’s Fort Greene Park earlier this week, prepared to burn an American flag, but ran into a roadblock made up largely of military veterans.

The anti-police activists were egged on by a group known as Disarm NYPD, which claims that “the desecration of [the flag] is timely and incredibly necessary at this juncture in political affairs.”

What was also “timely and incredibly necessary” in this particular demonstration was the number of pro-American flag counter-protesters who showed up to stop the cop haters and ultimately chase them out of the park.

A protest at Brooklyn’s Fort Greene Park Wednesday night exploded into a heated confrontation between rival demonstrators over the burning of an American flag.

Witnesses say a pro-flag demonstrator snatched the burning American flag before others chased the anti-flaggers away.

No arrests were made.

“My nephew is graduating from the Marines in two weeks,” said flag supporter Diane Atkins of Bay Ridge. “I’ll be damned if somebody burns the flag!”

The anti-police group that had previously relished public attention suddenly looked for the nearest exit when the patriots started hounding them.

A member of the anti-police group insisted that the American flag “represents genocide, imperialism, and oppression.”

One comment on the Disarm NYPD Facebook page noted the irony that the group whose goal was to protest the police presence in New York City turned to the police for help when the counter-protest overwhelmed their efforts.

While we certainly don’t advocate violence against anyone — even someone burning the American flag — it is interesting to watch a group first beg for attention, then go scurrying away when people who stand up for their country put the heat on.

Cartoon bonus: ? and Stripes
Next Post
Syracuse U. professor claims reason itself is a white male construct