It’s fair to say that there’s no reasoning with John Caputo, who teached philosophy and religion professor at Syracuse University. The professor gave an interview to the New York Times Thursday in which he critiqued the notion of pure reason as simply being a “white male Euro-Christian construction.”

Caputo was being interviewed by fellow philosophy professor George Yancy for the 13th installment of an interview series Yancy conducts with philosophers regarding racial topics.

Given its emphasis on first principles and abstract thought, one is tempted to view academic philosophy as a turf where the race of participants matters little, but Caputo says that’s entirely untrue. In fact, race, he argues, is of paramount importance, and it’s proven by the mundane phrases philosophers use.

“‘White’ is of the utmost relevance to philosophy, and postmodern theory helps us to see why,” Caputo says in the interview:

I was once criticized for using the expression ‘true north.’It reflected my Nordo-centrism, my critic said, and my insensitivity to people who live in the Southern Hemisphere. Of course, no such thing had ever crossed my mind, but that points to the problem. We tend to say ‘we’ and to assume who ‘we’ are, which once simply meant ‘we white male Euro-Christians.’

The end result of critiquing whiteness, Caputo suggests, is the realization that the supposed “reason” underlying philosophy is just another form of white privilege … or something of that nature:

I think that what modern philosophers call ‘pure’ reason — the Cartesian ego cogito and Kant’s transcendental consciousness — is a white male Euro-Christian construction. White is not ‘neutral.’ ‘Pure’ reason is lily white, as if white is not a color or is closest to the purity of the sun, and everything else is ‘colored.’ Purification is a name for terror and deportation, and ‘white’ is a thick, dense, potent cultural signifier that is closely linked to rationalism and colonialism. What is not white is not rational. So white is philosophically relevant and needs to be philosophically critiqued — it affects what we mean by ’reason’ — and ‘we’ white philosophers cannot ignore it.

What does this all mean for regular people, such as the Times’s readers? Beneath all of the postmodern philosophical rhetoric, it’s not easy to tell, but much like the litany of recent academics hurrying to comment on “white privilege,” Caputo takes time to stick his finger in the eyes of Christianity and, of all things, freedom — as if those two are the major arbiters behind all the woes America faces:

The great scandal of the United States is that it has produced an anti-gospel, the extremes of appalling wealth and poverty. But instead of playing the prophetic role of Amos denouncing the American Jeroboam, instead of working to close that gap, the policies of the right wing are exacerbating it…. The popularity of such cruel ideas, their success in the ballot box, is terrifying to me. The trigger-happy practices of the police … on the streets of black America should alert everyone to how profoundly adrift American democracy has become — attacking the poor as freeloaders and criminals, a distorted and grotesque ideological exaggeration of freedom over equality. The scandal is that the Christian right has too often been complicit with a politics of greed and hatred of the other. 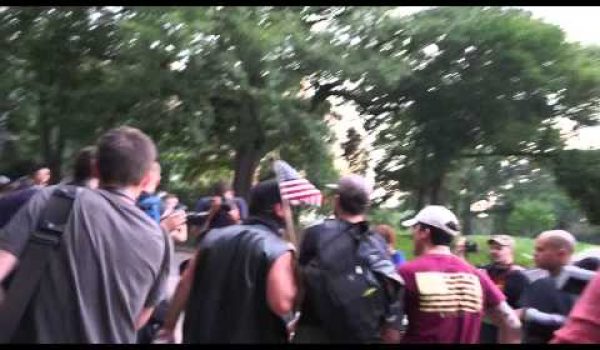