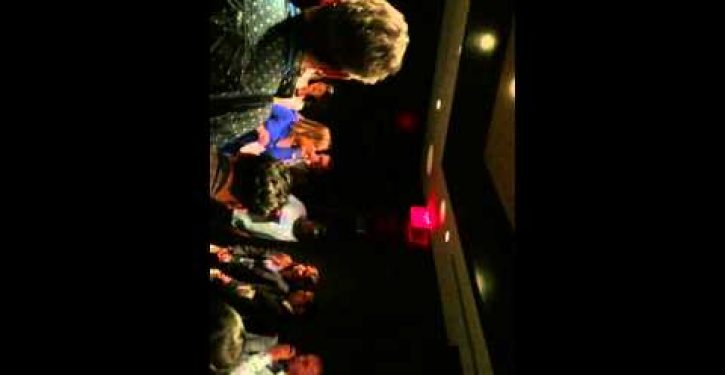 California Rep. and Democratic Senate candidate Loretta Sanchez apologized Sunday for placing her hand over her mouth and whooping in a gesture typical of Hollywood-style American Indians, while speaking to a group of Indian Americans while on the campaign trail Saturday.

Sanchez was joking about meeting with a supporter who she thought was an Amerindian when she made the gesture. Referring to the supporter in question, she told the group:

So I’m going to his office thinking that I’m gonna be with [whoops and taps her mouth] right? ‘Cause he said Indian American.…

She made the gesture while speaking to an Indian-American caucus on the eve of what was supposed to be her first major speech at the California Democratic convention to set up her campaign for retiring Sen.Barbara Boxer’s seat, reported the Los Angeles Times.

Sanchez tried to brush off the contention initially. Asked if the gesture was appropriate, she told a Times reporter, “I think Native Americans have an incredibly great history, and a great presence in our country, and many of them are supporting our election.”

Some of the Indian-American attendees found the gesture insensitive, and Sanchez’s chief Democratic rival in the race for Boxer’s seat, California Attorney General Kamala Harris, called the gesture “shocking.”

Sanchez apologized in her speech to the convention Sunday, saying she’s only human and pointing out she’s proudly Native American on her mother’s side. “So in this crazy and exciting rush of meetings yesterday, I said something offensive, and for that I sincerely apologize,” she said.

Just lucky for Sanchez she’s not a Republican. If she had been, she’d be toast now.