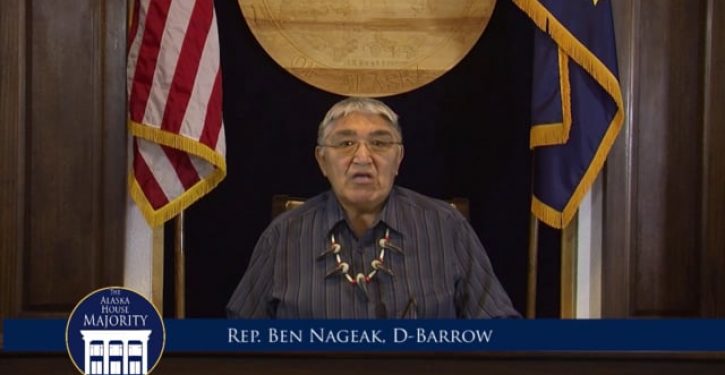 America’s only lawmaker to be born in Alaska’s Arctic National Wildlife Refuge is livid over President Obama’s plan to ask Congress to permanently lock up the region’s oil and gas resources and prevent offshore drilling. The person in question is Alaska State Rep. Benjamin Nageak, a Democrat and the only U.S. lawmaker from ANWR, who said:

We have thousands and thousands of acres of land that our people in the state of Alaska, especially in ANWR, have title to and [they] cannot even use that resource to enrich themselves.

That is wrong. When you give the people the ability to enrich themselves you don’t lock up their lands so they don’t do anything else but just sit on it and nothing comes out of it except the renewable resources that we depend on. That to me is wrong.

Nageak represents the town of Barrow on Alaska’s North Slope.

On Sunday, Obama announced he was asking Congress to designate virtually all of ANWR, including the oil-rich coastal plain, a “wilderness,” which would make the region off-limits to drilling. The Interior Department also put forward a new conservation plan for the region which includes keeping Arctic waters off-limits to oil and gas companies.

For decades, politicians have battled over whether or not to allow drilling in ANWR. The native tribes in the area overwhelmingly support opening up the region to oil and natural gas extraction, but stiff environmentalist opposition from Washington, D.C. has hampered efforts to allow resource extraction.

The White House and environmental groups said ANWR’s natural beauty and value needed to be protected from development. In a blog post, White House adviser John Podesta said that caribou and other animals were important to the Gwich’in tribe, which opposes drilling and calls ANWR the “Sacred Place Where Life Begins.” One Gwich’in village is located on ANWR’s southern border.

But the Inupiat tribe lives on ANWR’s coastal plain — where most of the oil is located. They support drilling in ANWR, according to Indianz.com. Oil and gas have been critical to the tribe’s revenues since the 1970s. Said Nageak, who was born in the Inupiat trade village of Kaktovik:

We are an extractive people. Without that, we wouldn’t have survived all those thousands and thousands of years. We want to produce on our lands as we see fit. Our native people have been taken advantage of since Europeans first came to the United States. It has not changed.

Nageak said that Obama “wants to designate our land as a wilderness. That means our people cannot enrich themselves because of the lock up of that land.”

Our people are tired of being told we cannot do things in our lands which is entitled to us from the Land Claims Settlement Act. You created that … so we could do something with that land.

But then we hear the president of the United States, our leader, say that ‘let’s just not listen to those people, let’s just lock it up for them. Let’s not let them enrich themselves. Let them take care of themselves however they can without their resources.’

If you throw food in the trash in Seattle, the city will slap you with a fine
Next Post
Media distort coverage of Menendez Iran sanctions delay to make it seem like an Obama win