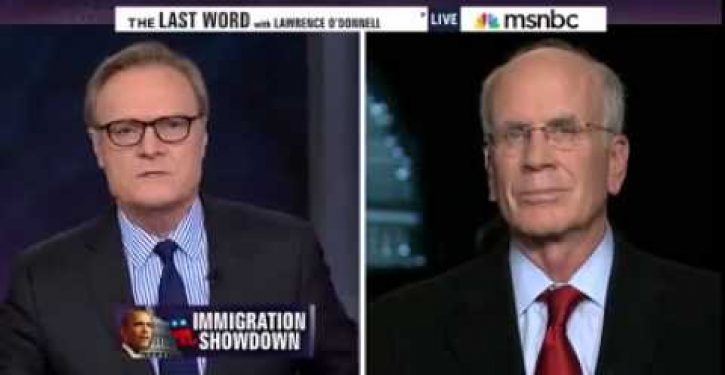 In fact, to his credit O’Donnell kept on the topic, saying he couldn’t locate a single Democrat in Washington who could answer the question of legality affirmatively. He asked the congressman whether he had heard any Democrats defend executive amnesty, to which Welch responded “I haven’t.”

O’Donnell:  No one at the White House has been able to give me the legal justification for the following components of the President’s plan which was leaked to the New York Times. The part where it says, and just to be clear at the onset, most of this is just prosecutorial discretion, it’s just law enforcement discretion. Every chief executive has that, from mayors to governors, police chiefs have that. We understand most of it is completely within the President’s power.

The part that’s questionable is the part where the New York Times says that the President will allow many parents of children who are American citizens or legal residents to obtain legal work documents.  Can you tell me and has the White House told you – What is the legal justification for the President to create a new category of beneficiaries for work documents. How can that be done without legislation?

Welch: You know Lawrence, I can’t tell you. I’m not the lawyer who’s going to be litigating this case. So the answer to that would be decided by the courts as you and I know. But here’s what I can tell you …

O’Donnell: Congressman then, so as far as you know. And I don’t mean to badger you about this but I’ve been on this for days now. I haven’t found a single elected Democrat, not one Democrat in Washington who can answer the question that I just put to you. Have you heard it answered by any Democrats?

There’s really no need to pursue this with Welch. Obama himself has said on numerous occasions that he doesn’t have the authority to enact a law without Congress.

The only difference now is that the president needs this to happen to ensure his legacy and to try to salvage his party from the damage he has inflicted on it. That in no way changes the truth about the illegality of his intended actions

Immigration: The two-year view
Next Post
Don’t mess with Texas! Lone Star state will sue Obama over amnesty by fiat