The posters feature a stark black and white Shaheen headshot with the iconic Obama “O” logo in place of her eyes and the word “zombie” repeated over and over again in the background, according to TruthRevolt, which reported:

The incumbent Shaheen, who is leading in most recent polls against rival Scott Brown, has voted with President Obama some 95% of the time while serving in the US Senate. The poster seems to imply that the Senator is a mindless zombie who will never part company with the unpopular president and his even less popular policies.

The Real Clear Politics average of polls has Brown closing in on Shaneen. He’s running just 0.9 percentage points behind.

This is the latest similar instance directed by street artists nationwide against Democratic candidates during the closing days of the midterms.

Posters directed against U.S. Rep. Maxine Waters (D-Calif.) appeared last week in Los Angeles, according to GotNews. These featured a black and white image of Waters, but with red dollar signs in place of the eyes and the inscription “Poverty Pimp.” Instead of the word “zombie” in the background, the phrase “Nig**s better have my money” is repeated.

Waters, who has held a Congressional seat since 1991, is being challenged by Republican John Woods Jr., a real long-shot. Woods has managed to accumulate slightly over $10,000 in campaign contributions to Waters’ $1,137,412, according to OpenSecrets.org.

The Shaheen poster, though similar to the Waters art, is a direct copy of another one that appeared Saturday in Lansing and Detroit Michigan, this time directed against Democratic Senatorial candidate Gary Peters, according to Ricochet, which reported:

No group has taken credit for the prank, but an anonymous source said, ”It was a very small band of conservatives outside of the GOP who decided to take action”.  Peters has struggled to overcome his association with Obamacare, and the source said that the plucky activists want to remind voters of that uncomfortable fact.

The Real Clear Politics of poll averages has Peters running 12.4 points ahead of his GOP rival, Terri Lynn Land.

Although it’s nice to see the fine art community supporting more conservative candidates for a change, it’s be nicer yet if their members began their campaign a bit sooner. 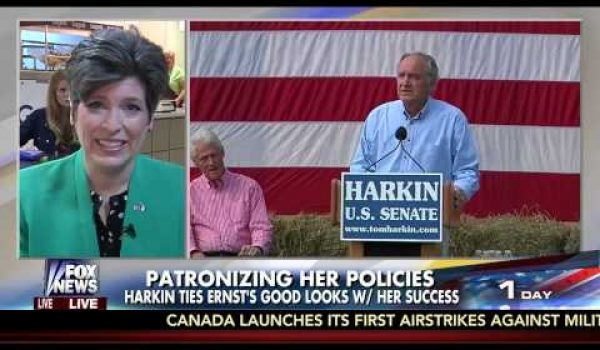