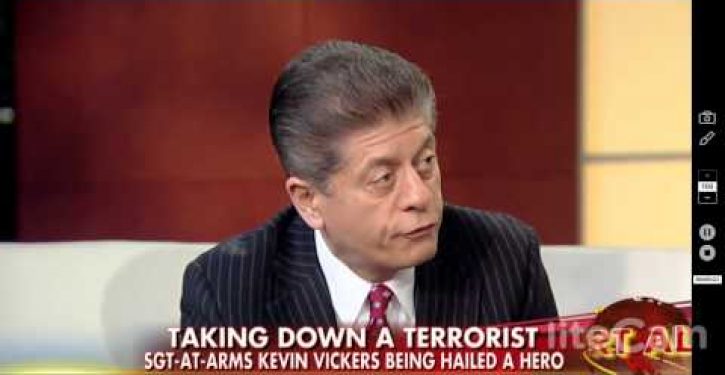 With President Obama and other U.S. officials expressing concern about so-called ‘lone wolf‘ terrorist attacks, and in light of the recent shooting in Ottawa along with a hatchet-wielding terrorist in New York City, Judge Andrew Napolitano has a rather simple solution.

The best way to stop ‘lone wolf’ terror attacks is through “an armed citizenry.”

Napolitano was discussing the heroism of Sergeant-at-Arms Kevin Vickers, who shot the gunman that had already killed reservist Cpl. Nathan Cirillo at the Canadian War Memorial in Ottawa, and had stormed the Canadian Parliament. Napolitano explained that had it not been for his status as a retired member of the Royal Canadian Mounted Police, Vickers would not have been allowed to carry a gun under Canadian law.

Concern in the U.S. has to be mounting – especially with multiple individuals gaining easy access to the White House lawn by climbing the fence – that an attack like that on American soil will be imminent. Preventing attacks will always be a difficult task, but stopping them prior to becoming a full-blown massacre can be accomplished, as we saw in Ottawa.

Napolitano:  Gun control laws in Canada are as Draconian as they have been in Washington, D.C. or Chicago. The government thinks the people should not be able to arm themselves. In my view, that’s the lesson.

Look, ISIS is a threat in many ways. This, in some respects is a very devious way because it’s the loner, it’s the lone wolf. We don’t know if this person came from an organization or did this on his own. This person does not cause a big commotion. It’s not an army marching on a city. It’s one guy getting out of a car and starting to shoot.

What is the best deterrent to that? An armed citizenry. People able to protect themselves. We have a Second Amendment in this country, they do not have the equivalent of that in Canada.

The problem with the ‘lone wolf’ label is that it is highly misleading. While they are indeed individual attacks, a good portion of them have been unified by religious ideology. Referring to them as ‘lone wolf terrorists’ minimizes that unifying factor.

“Oftentimes, a hero comes from among us,” Napolitano would add. “But the hero has to have the means by which to behave as a hero.”

Do you agree?  Is an armed citizenry the best way to stop terrorist attacks?

The Dunetz Political Report analysis: The Republicans will take the Senate
Next Post
Maryland latest to have mysterious GOP-to-Democrat vote-switching glitch