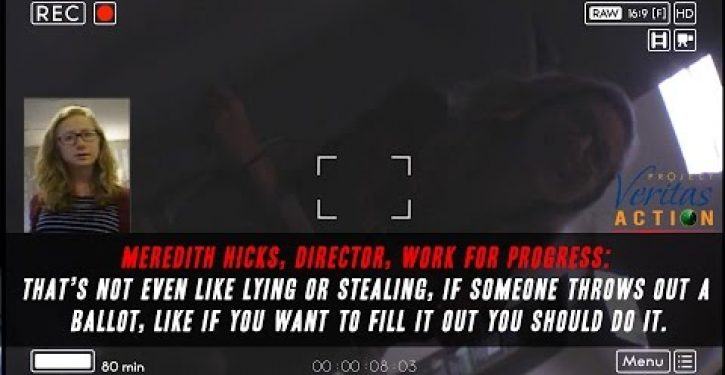 Making the whole situation even more delicious, four days before the video’s release, Democratic operative and frequent MSNBC contributor Donna Brazile tweeted the left’s oft-heard claim that the electoral process is already awash in integrity–that the notion of voter fraud is a complete lie.

On the following day, O’Keefe attached a screenshot of Brazile’s claim to his own tweet and told her she was about to eat her own words.

After this week, you’re really going to regret saying this, @donnabrazile pic.twitter.com/Vzr6Bgd99w

And she will. In one segment of the video, Okeefe approaches Meredith Hicks, a director for the liberal non-profit Work For Progress, which campaigns heavily for Udall. He suggests the idea of taking advantage of Colorado’s new all-mail-in voting procedure by filling out discarded ballots. She’s giddy with the prospect.

“I mean, that’s not even lying and stealing if someone throws out the ballot,” she says after laughing. “If you want to fill it out you should do it.”

Later in the video, Hicks even offers O’Keefe a job.

In another segment a Project Veritas undercover reporter is shown suggesting the same procedure to Greenpeace worker Christen Topping, who supports Udall. He brings up the discarded mail-in ballots of university students who have moved out-of-state.

“I mean, it’s putting the votes to good use,” she said. “So really. truly. like yeah! That’s awesome!”

Watch the video, via Project Veritas.