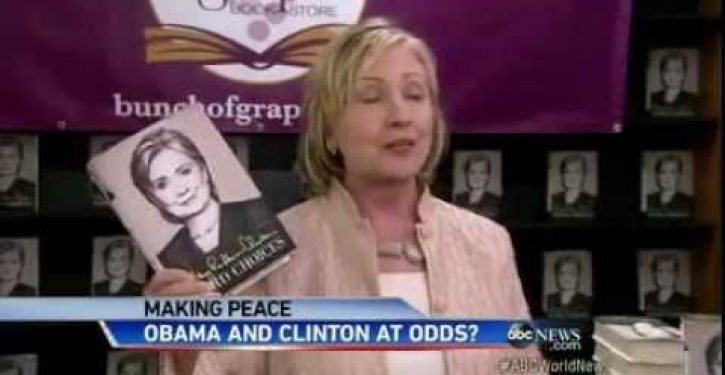 The interplay that has taken place between former Secretary of State Hillary Clinton and President Barack Obama tells volumes about each. Clinton is too ready to abandon her principles and back down from a fight to be a courageous president; Obama’s hypersensitivity to criticism makes him an ineffective president.

The troubles began when Clinton attempted to distance herself from the president by criticizing him in an interview published in The Atlantic earlier this month.

“The failure to help build up a credible fighting force of the people who were the originators of the protests against Assad—there were Islamists, there were secularists, there was everything in the middle—the failure to do that left a big vacuum, which the jihadists have now filled,” Clinton told The Atlantic’s Jeffrey Goldberg.

Obama showed the world once again just how thin-skinned he is in response to his former secretary of state. It was summed up in one word: “Horses**t,” according to The Daily Beast.

And Clinton demonstrated a distinct lack of courage Wednesday by not only backpedaling from her earlier critique of the president, a fact noticed by the hosts of MSNBC’s Morning Joe, but also refusing to answer a question about the president’s handling of events in Iraq.

“Well, do you think he’s handling the situation in Iraq right now? I mean, would you be doing it differently?” ABC News reporter Jonathan Karl asked Clinton at a book signing in Martha’s Vineyard, where the Obamas are also vacationing.

“I’m excited about signing books,” was her response.

Watch the ABC News clip below.

The Special Report Fox News panel mocked Clinton’s refusal to stand on principle and instead announce a “phony hug summit” she’d scheduled with the president for later that evening.

Although most of the criticism was directed at Clinton, panelist and National Journal senior political columnist Ron Fournier threw a well-placed barb at Obama also.

“Why is the President of the United States so thin-skinned that he can’t let his former secretary of state — who he owes an allegiance to — can’t let her say, ‘You know, maybe we should’ve armed the Syrian rebels?’” he asked.

“And she even said, ‘I don’t know how it would’ve turned out, but I think we should’ve done it,’” Fournier continued. “He couldn’t even let her get away with that! He had to sic his attack dogs on her, a very 1990s, old kind of politics thing to do. And this is supposed to be the man that’s above all that.”

Fox news anchor Shannon Bream, filling in for Bret Baer, asked whether it was simply a case of Obama preserving his “legacy.”

“Well, let the policy rule your legacy!” Fournier shot back. “Your legacy shouldn’t be that you’re beating up on Hillary Clinton.”