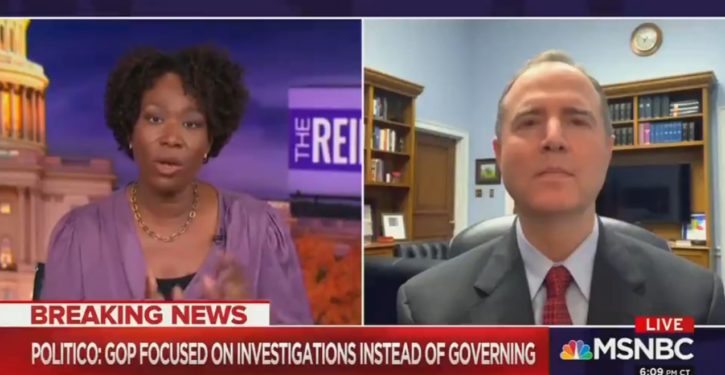 It’s hard to say which is the best part of this lament by MSNBC’s Joy Reid over “the next four years.” Maybe it’s that her guest is Rep. Adam Schiff (aka Mr. Impeachment), who like her is unfazed by the irony of being asked about a political party abdicating its responsibility to legislate to devote all of its energies to investigating the administration.

A particularly memorable moment in her rant is her projected refusal by Republicans to help “people during this awful pandemic.” The Democrats were certainly uninterested in postponing their impeachment fantasy when the CDC confirmed its first U.S. coronavirus case on Jan. 21 or WHO issued global health emergency on Jan. 31 or the U.S. declared a public health emergency on Feb. 3.

But of course the winning passage is her complaint that the Republicans “want to go after the Mueller probe.” She was perfectly content when the Democrats abandoned their responsibility as legislators for the first half of Trump’s term in office to pursue that same probe, which turned out to be bogus. (RELATED: CNN: Conservatives joining Parler a ‘threat to democracy’)

Schiff, who claimed he had “iron-clad proof” of Trump’s guilt leading up to and through the entirety of Russiagate, adds his two cents, but he is really yesterday’s news at this point.

Video: Amazing stuff as MSNBC's Joy Reid and Adam Schiff say Republicans investigating a Biden administration would not only be obstruction, but a degradation of our democracy and waste of the people's time. pic.twitter.com/PvodYznI1G