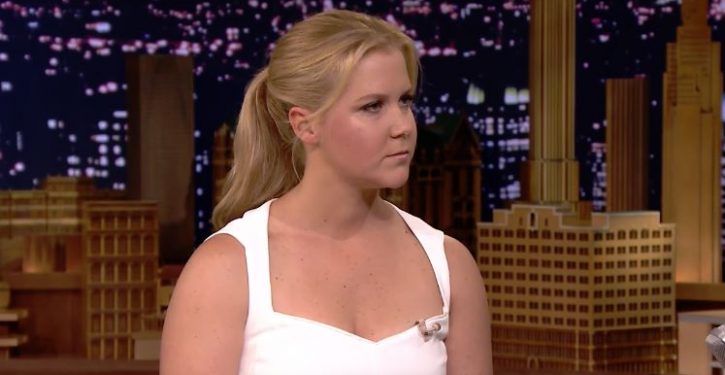 That does it for me. On Super Bowl Sunday, the TV in my living room won’t be tuned to the big game but to reruns of “Gilligan’s Island” or whatever else it is that runs opposite this media mega-event.

I was planning to watch the game and even invite some buddies over. But then I discovered that Amy Schumer has said she will not appear in any Super Bowl ads this year. The move is out of solidarity for liberal celeb Colin Kaepernick.

Via the Associated Press:

The comedian and “I Feel Pretty” actress explained her stance at length Friday on Instagram, challenging white NFL players to kneel as well. Addressing them directly, she wrote: “Otherwise how are you not complicit?”

Complicit in what she doesn’t say. Then again, she probably has no better idea what Kaepernick’s motivation is for kneeling during the playing of the national anthem than he does. He has claimed since ever his career went south in 2016 that it’s a crusade to stamp out police oppression of minorities. Yet in October 2017, he intimated he would stop taking a knee if an NFL team gave him a job. Can Amy Schumer spell hypocrisy? (Actually, that’s a stupid question.)

Schumer isn’t the only celebrity who has announced the intention to sit out the big game. An article in US magazine suggests that singer Rihanna was offered the halftime stage at the Super Bowl but has declined, saying she “stands with Kap.” (Kap doesn’t stand, he kneels, but whatever.)

“The NFL and CBS really wanted Rihanna to be next year’s performer in Atlanta,” [an] insider reveals. “They offered it to her, but she said no because of the kneeling controversy. She doesn’t agree with the NFL’s stance.”

After Rihanna, 30, rebuffed the halftime offer, the NFL extended it to Maroon 5. Us Weekly broke the news in September that the Adam Levine-fronted pop-rock group gleefully accepted.

Here’s a better idea: Why not go back to treating halftime during the Super Bowl as a 12-minute break, which is its length for games during the regular season? When players sit inactive for half an hour or longer, the blood in their muscles begins to pool.