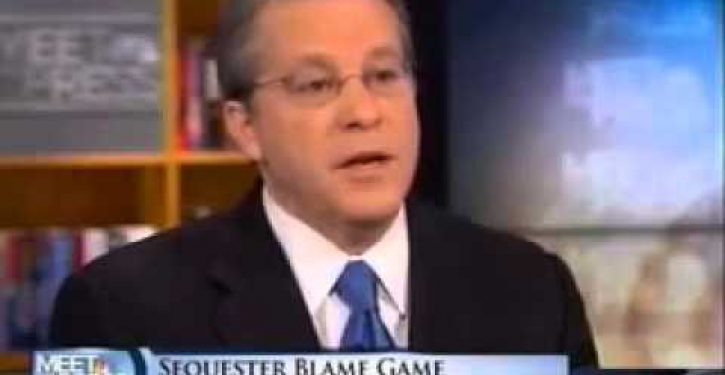 Pigs really can fly — almost. On Sunday, exactly one day after President Obama’s most recent assertion that the GOP was solely to blame for opening the Pandora’s box that is sequestration, his embattled economic adviser Gene Sperling admitted (with caveats) that the administration dreamed up the plan.

Sperling, who famously (and vehemently) refuted journalist Bob Woodward’s claim this past week that the “White House had moved the goalposts” in its budget battles with Republicans, was a guest on NBC’s “Meet the Press.”

Asked about the $85 billion in automatic budget cuts that began at midnight Saturday, Sperling said:

The idea was not that these [cuts] would go into effect, but that people of good faith would come back and compromise….

The president was overall right in that the idea of an across-the-board, all-spending cut was the idea of Republicans … but yes, we put forth the design of how to do that.

Sperling never explains the glaring contradiction in his remarks — that the idea originated with administration but that Republicans are somehow nevertheless responsible. The best he was able to offer was a clumsy rehashing of an analogy by liberal pundit Jonathan Chait:

If a mugger demands your wallet, you say you left the wallet at home but offer your watch, it’s a wee bit unfair to describe the plan to give him a watch as ‘your idea.’

Putting aside the dismaying ease with which Chait and Sperling equate the GOP proposal to a robbery, the analogy is false. It paints a picture of Obama as a victim with his back against the wall, when his posture all along has been that of an eager and defiant combatant. In November 2011, he haughtily declared his intention to veto any efforts to avert sequestration that failed to include a tax increase on the wealthy.

After getting that concession in January, the president did indeed move the goalposts. Despite Sperling’s efforts to concede that the administration is guilty as charged but with extenuating circumstances will not hold up to further scrutiny.