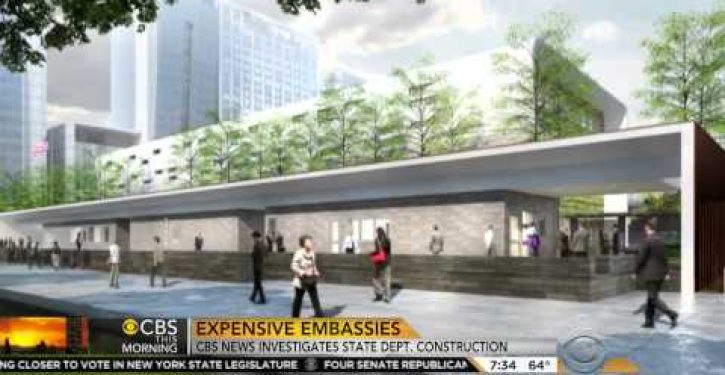 State Department spokesperson Marie Harf blasted a report from CBS News which claimed that the United States Embassy in London is $100 million over budget.

Harf was clearly not happy with the story and responded angrily on Twitter by saying, “This is 100% inaccurate. There’s not now and has never been a $100m overage – has ALWAYS been w/in budget. #facts”

.@CBSThisMorning @CBSNews This is 100% inaccurate. There’s not now and has never been a $100m overage – has ALWAYS been w/in budget. #facts

Patrick Kennedy, U.S. State Department undersecretary for management, “disagrees with the findings of the report,” saying:

“”We have reviewed our processes and feel very, very comfortable that our use of the design initiative gets us the security we need and the functionality we need at the best possible price.”

The winner of the design for embassy in London is discussed here. The proposed building is pictured in this article.

One cannot help but to think of the silly narrative that “Republicans cut funding for embassies” after the Benghazi terror attack on Sept. 11 2012.

“A new State Department initiative to build unique, energy-efficient embassies across the globe is drawing criticism for both its excessive costs and the security concerns posed by the time it’s taking to build new embassies.”

“The State Department undertook an internal security review after the Benghazi attack, which found that the slower pace of construction left ‘more personnel exposed in inadequate facilities for larger periods of time.’ It additionally found that there was ‘no evidence of a . . . cost benefit analysis supporting this new . . . initiative.'”

Armed Russian jet in ‘most dangerous close pass in decades’ in Far East
Next Post
No-logic zone: Criticizing the NRA when you have no idea what you’re talking about