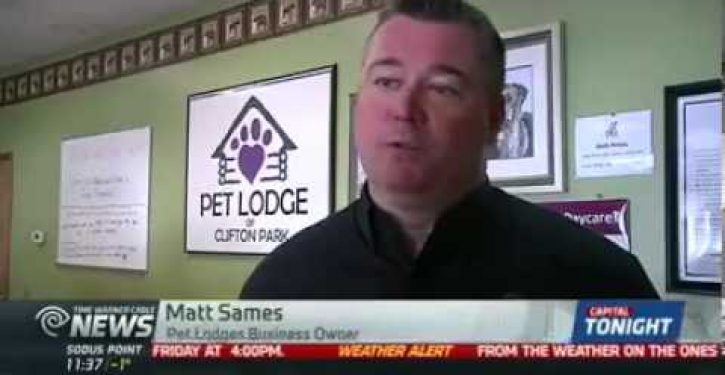 Citing the potential to incur $100,000 in fines or penalties thanks to Obamacare, New York business owner Matt Sames has announced the cancellation of expansion plans for his Pet Lodge franchise.

“Everything’s on hold,” Sames said.  “We won’t grow.  We won’t reach that threshold.”

The business owner who planned to open two more locations concluded, “It’s not worth it for us.”

The reporter goes on to explain:

“He says he scrapped his plans because of the Affordable Care Act. Opening two more locations would increase his company’s employee size to 50, making it mandatory for him to provide health care for all his workers.”

During a press conference on Wednesday, Senator Chuck Schumer followed Harry Reid’s lead in declaring negative Obamacare stories to be a lie.

“Over the next several months, the ACA is going to become less important as a Republican campaign issue,” said New York Sen. Chuck Schumer at a press conference, “because more and more Americans, from young adults all the way up through seniors, are realizing the benefits it has to offer.”

“In addition,” he added, “the parade of horrible stories trotted out by the haters of this bill have proved not to be true.”

A business survey cites health care costs as the biggest concern for employers. According to this report, “nearly 60% of businesses have increased costs to their business or employees as a result of the Affordable Care Act.”