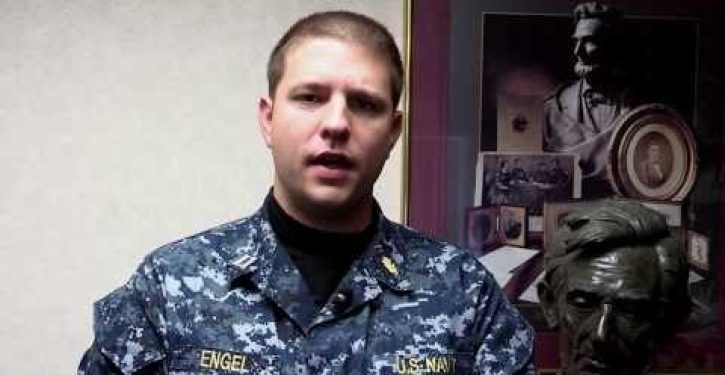 The indefatigable LU Staff highlighted today an egregious omission from President Obama’s video-recorded reading of the Gettysburg Address:  the dropping of the words “under God” from the final sentence.  As Staff points out, Obama has a pattern of cutting out references to God from passages well known to the American public.

But other Americans commemorate the great battle and Lincoln’s beloved speech differently.  Consider, for example, the recitation of the Gettysburg Address by the crew of the USS Abraham Lincoln (CVN-72), a Nimitz-class aircraft carrier.  Watch for Petty Officer First Class Cosby at 1:22.

USS Gettysburg (CG-64), a Ticonderoga-class Aegis cruiser, is deployed to Southwest Asia with the USS Harry S Truman (CVN-75) strike group.  The photo with the aircraft carrier (Truman) below, from early November, shows both ships in the Gulf of Aden, where Gettysburg has been on antipiracy patrol.  Gettysburg (ship’s motto: Deeds not words) flies the “Gettysburg Flag,” visible as indicated in the photo.  The second photo, from 2012 (above), gives a better view of the Gettysburg Flag aloft over her namesake warship.

Abraham Lincoln knew that the battle he was commemorating was about the soldiers and the people of a great nation.  Today, the U.S. Army knows that to understand the origins of modern warfare, and the American tradition of the citizen-warrior, you have to visit Gettysburg.  You have to study the battle, and the war.  You have to walk the fields where the two armies clashed, in a thunderous engagement that took, in the space of three days in July, more lives than America lost in the entire Korean War.  (The U.S. Army War College is, of course, in Carlisle, PA, just up the road.)

Year after year, the Army sends its students to Gettysburg.  It sends dignitaries too, and choir and band, to add solemn ceremony to official events.  But in the iron chain-link of brothers-in-arms across time, it was the Army’s who fought and died at Gettysburg, an all-too-brief 150 years ago.  For the Army, Gettysburg isn’t a once-a-year commemoration but a defining orientation point for its ancient profession, and a touchstone for the meaning of American arms.   So the Army goes to Gettysburg, to think, to study, and to walk.

Meanwhile, a crop of new Americans was present to take the citizens’ oath of allegiance as part of the long slate of commemorative observances at Gettysburg today.  Welcome aboard, shipmates.

I furnish here an item of great interest to me: the address delivered at Gettysburg on Memorial Day, 1928, by Calvin Coolidge, one of the few sitting presidents to make a commemorative address at the battle site.  (Eisenhower spoke at the 100th anniversary commemoration in 1963; JFK was heading to Dallas.)  I urge you to take a moment to read the Coolidge speech.  Just read it, and see what you think.

Finally, you may remember this guy.  He is reciting the Gettysburg Address for the “Learn the Address” website sponsored by filmmaker Ken Burns.  And, yes, at 1:36, he includes Lincoln’s words “under God.”