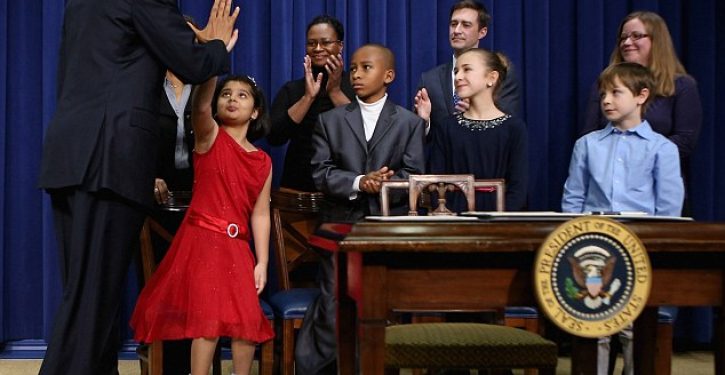 In 2007, a U.S. senator appearing on CNN’s Larry King show excoriated then-President George W. Bush for his “tendency … to try to hide behind executive privilege.” To be sure, Bush 43 set a record for executive orders, issuing 78 in his eight years in the Oval Office. That record might still be standing if Bush’s successor – who coincidentally was that very same senator who bellyached to King – hadn’t bested him by half, and in just four years.

But today, President Barack Obama outdid even himself, MailOnline reports. He affixed his John Hancock to 23 executive orders – twice as many as FDR signed in 12 years – in a single sitting! Chalk one up for unmitigated gall and unparalleled hypocrisy.

“We can’t put this off any longer,” Obama said by way of explanation for his unprecedented power grab. “When it comes to protecting the most vulnerable among us, we must act now.”

He then proceeded to sign executive actions on measures ranging from universal background checks on all gun buyers to a renewed ban on “military-style” assault weapons to a 10-round limit on ammunition magazines. The full list follows:

He followed up with a gesture of exaggerated humility, claiming:

The 23 executive actions I’m announcing today in no way substitute for action from members of Congress.

But then he quickly reverted to vintage Obama, adding:

This will be difficult. There will be pundits, politicians and special interest lobbyists warning of a tyrannical, all-out assault on liberty. Not because that’s true, but because they want to gin up fear or higher ratings or revenue for themselves. And behind the scenes they will do everything they can to block any commons-sense reforms. It didn’t take long for the National Rifle Association’s Wayne LaPierre to take the bait, circulating copies of a fund-raising letter at 35th annual Shooting, Hunting, Outdoor Trade Show and Conference in Las Vegas. The letter read in part:

I warned you this day was coming and now it’s here, It’s not about protecting your children. It’s not about stopping crime. It’s about banning your guns … PERIOD!