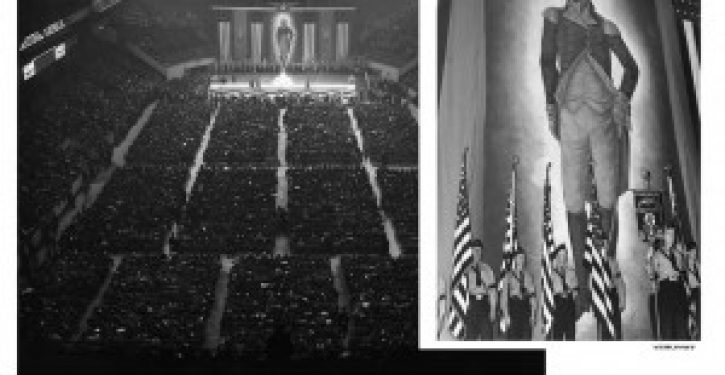 Most American history buffs are familiar with images of the swastika in the skies over New York City, but those were the days just prior to World War Two when the United States was, at least on paper, neutral towards the National Socialist government in Berlin. Yet as the New York Post reported today, the Crooked Cross has again made itself known in the Big Apple.

This go-round has nothing to do with flammable Deutschländer airships or with homegrown Yankee Doodle Dummkopfs who actually believed George Washington was America’s first fascist. The airborne banner was sponsored by a group known as the Raëlians, a pseudo-religion founded in the hippy-trippy 1970s by race-care enthusiast and journalist Claude Vorilhon, who now wants to be known simply as “Raël.”

The banner promotes the website ProSwastika.org, where Vorilhon and his followers seeks to rehabilitate the misunderstood symbol. According to Raëlian spokesman Thomas Kaenzig, “It’s very important to reclaim it and explain to the public that this symbol has a beautiful origin.” Kaenzig also believes the swastika was first given to our ancient ancestors a few million years ago, courtesy of visiting space aliens.

Vorilhon claims he met in 1973 with an extraterrestrial race called the Raëlians, who eventually enlightened him with the wisdom of the ages. Vorilhon was also tasked by his alien overlords with preparing the human race for their eventual return. To further solidify his credibility, he claims that two years later the Raëlians whooshed him off to a distant planet for a series of personal pow-wows with the likes of Buddha, Moses, Mohammad, and Jesus Christ.

As correctly noted on ProSwastika.org, the symbol actually predates Hitler and the Nazis. A talisman of success and prosperity for Hindus, Buddhists and Jains, the swastika transcends many of the world’s cultures and religions. Also popular among many of the American Indian tribes, the swastika signaled the Hopi propensity to roam hither and yon and was a sacred symbol to the Navajos, who considered it essential to their healing rituals.

The bent emblem has also been found globally, such as from a window on the Via Rita Rosani Jewish Synagogue in Verona, Italy (constructed in 1864) to an ancient Shinto Shrine in Yamanakako, Japan to a 1916 all-girls Canadian ice hockey team aptly named The Edmonton Swastikas.

Palin and the strategic impeachment question
Next Post
Cartoon of the Day: Israeli vs Hamas defense shields