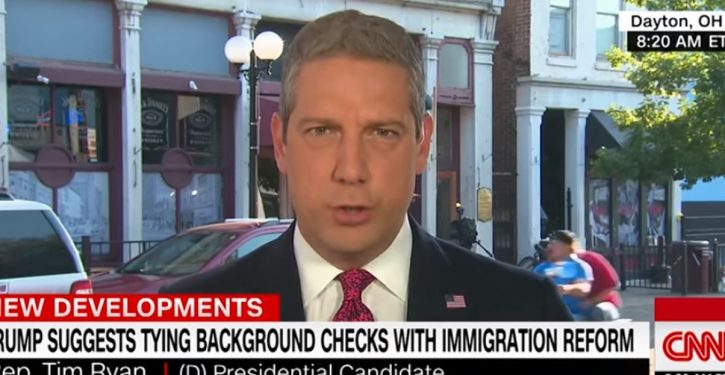 “Ohio Democratic Senate candidate Rep. Tim Ryan pledged to support taxpayer-funded gender reassignment surgeries for incarcerated Americans and illegal immigrants during his unsuccessful bid for president,” reports Fox News. “Ryan’s commitment came in a 2019 presidential candidate questionnaire …..Asked whether he would use his ‘executive authority to ensure that transgender and non-binary people who rely on the state for medical care – including those in prison and immigration detention – will have access to comprehensive treatment associated with gender transition, including all necessary surgical care,’ Ryan stated ‘yes.'”

The questionnaire also “asked the candidates whether they would commit to reducing “the size of the immigration detention system by at least 75%” and largely eliminating detention of illegal immigrants. “Again, Ryan checked the box indicating ‘yes.'”

“Ryan also committed at that time to support ‘ending the use of ICE detainers,'” which notify local police that ICE seeks to detain an illegal alien. As Fox News notes:

Ryan, who currently represents the Buckeye State’s 13th Congressional District in the House and is looking to succeed retiring GOP Sen. Rob Portman, has attempted to distance himself from party leaders and portray himself as a moderate in the Ohio Senate race against JD Vance, his Republican challenger.

In a September interview, Ryan insisted that President Biden has “made some big mistakes” when it comes to securing America’s southern border.

In a statement to Fox News Digital, the Vance campaign said Ryan’s commitment to the funding of gender reassignment surgeries for illegal immigrants is a “radical” position.

“Taxpayer-funded gender reassignment surgeries for illegal immigrants: you really cannot get more radical than that,” a Vance campaign spokesperson said. “Tim Ryan has spent this entire campaign lying to Ohioans about his record and trying to convince them he’s a moderate. The truth is that he’s just a far-left, woke liberal who wants to waste taxpayer money on insane ideas like this. He doesn’t belong anywhere near the U.S. Senate.”