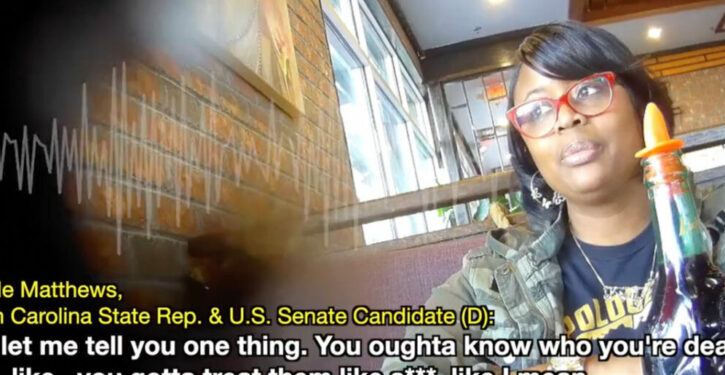 A South Carolina Democrat running for U.S. Senate appeared to go on a racist tirade against white people in video footage captured by Project Veritas.

Krystle Matthews, a state representative for the 117th district, was reportedly filmed saying white people need to be treated “like sh*t” in order to gain respect — otherwise they act like children.

“My district is slightly Republican and it’s heavily white. I’m no stranger to white people, I’m from a mostly white town. And let me tell you one thing, you oughta know who you’re dealing with, like, you gotta treat them like shit, like I mean, that’s the only way they respect you.”

U.S. Senate candidate & Democrat lawmaker in South Carolina @kmforsenate was recorded disparaging white people & saying, “treat them like sh—.” She compared whites to children that need to be kept under control.pic.twitter.com/xkvziUvFZo

“I keep them right here, like under my thumbs. That’s where I keep it, like, you have to, otherwise they get outta control like kids. So for me, I know other people are tip-toeing around them. And I’m like ‘yo, that’s some white shit. I ain’t doing that’,” Matthews allegedly said.

Matthews then said one of the problems she had with Independent Vermont Sen. Bernie Sanders was that he was “afraid to say black shit” and spoke to black people like a white person.

“I still gotta struggle to raise money for my campaign? Where the fuck is my black people with more? I don’t care about no dope money. Give me that dope boy money,” Matthews appeared to say.

The Daily Caller has reached out to Matthews for comment and will update the article as necessary.