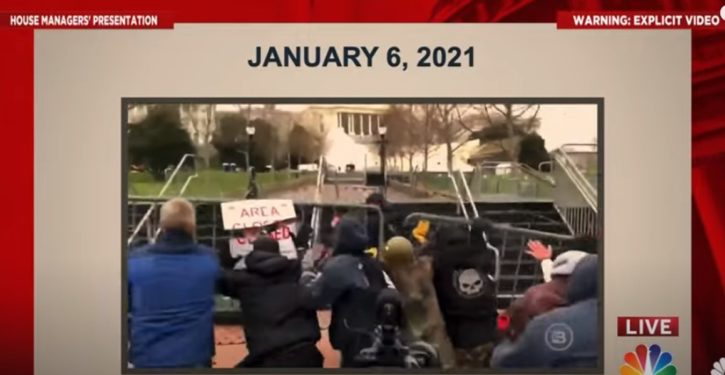 Video of the first breach in the Capitol riot on 6 January. according to House impeachment managers. 12:53 PM EST. House managers video via NBC News, YouTube

The FBI arrested Republican Michigan gubernatorial candidate Ryan Kelley on Thursday on charges related to the Jan. 6 riot at the Capitol.

Kelley was charged with misdemeanors including “committing violence against a person or property on restricted grounds, damaging federal property, disorderly conduct and entering a restricted building or grounds without permission,” The New York Times reported, citing a criminal complaint.

He is the first person running for a major election at the state or federal level to be charged in connection with Jan. 6, according to the outlet.

BREAKING: The FBI has arrested Republican candidate for governor Ryan Kelley at his home and taken him into custody.

The FBI received several tips about Kelley’s presence at the Capitol on Jan. 6, including pictures and videos of a man believed to be him wearing “a black coat, aviator sunglasses and backwards black baseball cap,” according to Fox.

The affidavit says Kelley was allegedly seen filming a crowd of protestors “assaulting and pushing past U.S. Capitol police officers” and waving for the crowd to head inside, according to the outlet. It is unclear if he entered the Capitol. (RELATED: Judge Removes Republican From Ballot In Key Gubernatorial Race)