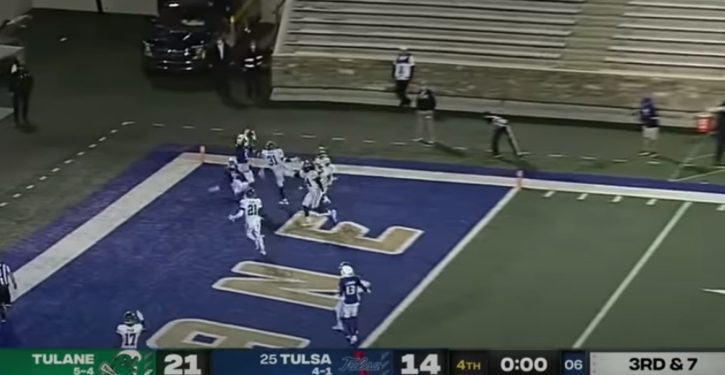 Tulsa WR #5 Juancarlos Santana catches a 56-yard heave from backup-backup QB #7 Davis Brin to even the score and go to OT with Tulane, 19 Nov 2020. The American video, YouTube

Already, this football week has been more than our hearts can take.  Tulsa had to have a 2OT win over Tulane, after a scoreless first half and a sluggish start late in the 3Q, with the added bonus of recruiting an nth string quarterback from (we imagine) somewhere down Highway 75 mid-game, and evening the score with a 56-yard Hail Mary on the last play of the game to go to OT, and boy was it exciting.  We like those 62-9 OU-style blowouts a little better sometimes, especially when the U.S. national election is in OT and the officials have been conferring on the last play review for over two weeks.  We’re just saying.

Meanwhile, or previously, Toledo had a most satisfying 45-28 win over Eastern Michigan on Wednesday, tucked tidily into four quarters.

Central Michigan put up an uncharacteristic fight against Western Michigan in the Storied Rivalry for the Victory Cannon (yes, another little petite, dainty thing), only going down 52-44.  So, good on the Chippewas.  (Congrats to the Broncos, of course.)

And we were extremely sorry to see the Storied Battle of the Bricks cancelled between Ohio and Miami (OH), because it’s one of our most way-favorite Storied Rivalries.  That’s commitment, right there: fighting it out over a brick-and-column-mounted brick.  Some schools might disdain to do that, but they know from bricks in Ohio.

The other thing that wrung our hearts was seeing the Utah State-Wyoming game, scheduled for Thursday night, go to a Melancholy Cancellation.  Now, that Storied Rivalry is waged for a most worthy firearm: the Bridger Rifle.  We’re totally into bronzed footwear and horse statues, don’t get us wrong.  But nothing says “Cowboy up!” quite like an iconic trophy rifle.  Life is flatter without it.

Air Force, we are happy to report, is up 21-0 on New Mexico in Colorado Springs this evening as the 3Q winds down.  Earlier, UMass had us walking on sunshine, benefiting from a safety on Florida Atlantic to actually retire with points from a 24-2 loss.  You take what you can get, and we appreciate our Minutemen.

And après ça, le CFP ranking, due out on Tuesday 24 November.  Hard to believe, but we’re here.  Prepare to make merry, since there won’t be a darn thing we can do about any of it.

New #25 University of Tulsa Golden Hurricane, which beat Notre Dame 28-27 on 30 October 2010, as mentioned got past Tulane 30-24 in 2OT on Thursday night.  We’ll enjoy the #25 while we’ve got it.  The defense is certainly justified in being up there.  The next meet is the 28th at Houston.  Nothing but Big between now and season’s end. 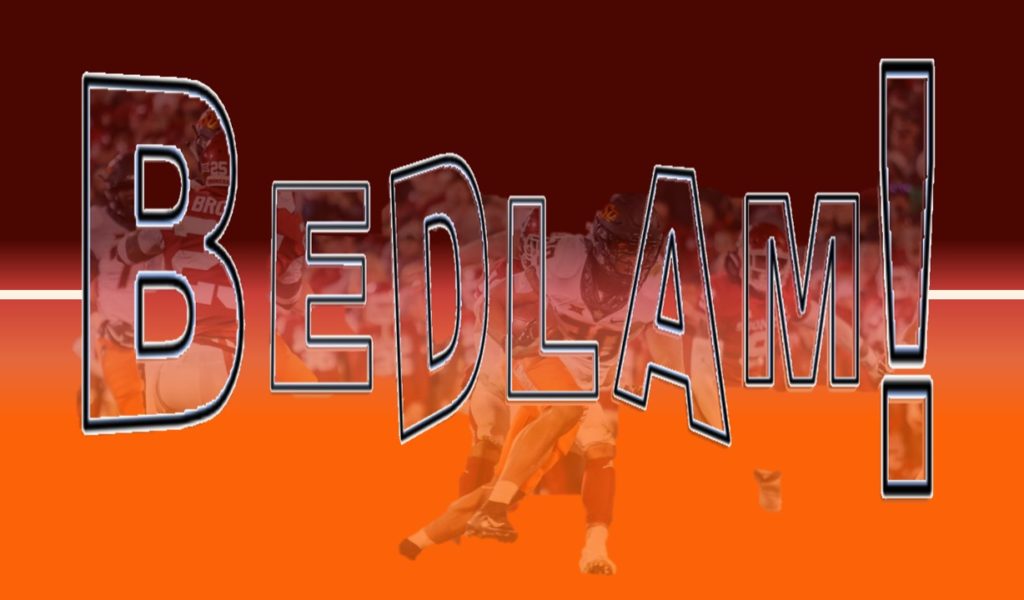 … in the marquee slot Saturday evening, which you’re darn tootin’, and we should hope so.  This is a big game for the Big 12.  They don’t come bigger.  If you don’t have Oklahoma football in your blood, you may not know that OK-State’s quarterback is Spencer Sanders, while Oklahoma’s is Spencer Rattler, so the Spencer-ness is coming out the woodwork from Elk City to Sallisaw and back (and yes, we know, those aren’t on the state lines, but they are the first I-40 stops inside Oklahoma – west and east, respectively – where there’s a Braum’s, which matters a lot more).  In the battle of the Spencers, the sporting world expects Rattler, who we are assured is at “100%,” to take top honors.  We’ll see.  It’ll come down to that still-growing Sooner D.

One of those tiresome Victory Bells for this Storied Rivalry.  OU is giving 7.5.

Navy and South Florida are Solemnly Postponed, which is getting a little old.

Air Force, as discussed, is cruising over New Mexico as we type this.

Virginia Tech (4-4 if you’re keeping records) will be at Pitt (4-4 even if you’re not keeping records) Saturday afternoon, giving 3 to the Panthers.  This year is kind of ruining the ACC for us.  It’s usually, like, “Clemson (or maybe FSU), and then everybody else,” with everybody else mucking around mid-season at 5-5 or 6-4 or in there like that, still in contention.  But now there’s Notre Dame, the Big Buzz-kill, perched atop the heap at 8-0, and Clemson and Miami (Da U) at 7-1, and then this neat, seemly, graduated disposition through the 4-4s down to Syracuse at 1-8, and it’s so boring.  No way to pretend anybody below the top two or three has a chance for 2020’s division-less ACC-off at this point.

Nevada, we’re relieved to report, is still on to host San Diego State on Saturday afternoon – and such has been the improving quality of the Wolf Pack play that the Aztecs are only giving about 1.5.  Go Pack!

We’re also over the moon that LSU at Arkansas still looks to unfold as scheduled on Saturday morning.  LSU is giving just about 1, for which you can’t blame LSU’s always-intrepid bettors, after multiple Solemn Postponements and some ugly losses.  Arkansas’s not beanbag this year; this one could go any old way.

Kansas State has had time to get fed, watered, and motivated again, and will be at #17 Iowa State on Saturday afternoon.  This too is a big game for the Big 12.  The sportsbabblers will say the momentum is with the Bedlam game in Norman, but KSU and ISU have racked up records and they have to be gotten past.  They’re not exactly bumps in the road.  Should be a good game, although the oddsquad has the Cyclones giving 11.

TCU has the week off after last week’s loss to West Virginia, pride of the Big 12.  Next up: Kansas (motto: “What difference, at this point, does it make?”) on 28 November.

Toledo has played for the week, and will shift to the weekends next week, with Ball State visiting on the 28th.

Wyoming, after the Melancholy Cancellation, will tee off next Friday at scabies-ridden UNLV. The good part is, it’s an afternoon game, it being the Friday of Thanksgiving weekend.

#2 Notre Dame has the week off and will be at UNC on Friday 27 November.

#5 Texas A&M has been Solemnly Postponed with Ole Miss, and at this rate has as good a shot as anyone at hanging onto its present rank well into 2021.

#6 Florida (-31) is at Vanderbilt for a mail-in performance.

#7 Cincinnati is giving 5 at Central Florida.

There were 14 Solemn Postponements and Melancholy Cancellations on the Saturday slate this week, and frankly, they represented most of the juicy action.  Not that we don’t love us some Arkansas State at Texas State, but you know what we mean.

If we expected more of UCLA at #11 Oregon (-14), we’d give it the golf-clap endorsement.  Just leave it at that.  Likewise Mississippi State at #13 Georgia (-24), which always seems like it ought to be a Storied Rivalry, but isn’t.

We would not, of course, neglect to mention Middle Tennessee at Troy, the Storied Rivalry for the coveted Palladium trophy.  As far as we know, it’s the only statue of Athena mounted on a wooden base being awarded as a game trophy in all college football.  We’d even guess it’s the only one in any football associations in North America, if not the world.  (We aren’t that familiar with what they may have in the way of American football in Greece.)

We kind of hate to throw Michigan and NC State (motto: “They’ve got a football team?”) out there as bait, since they’re both playing teams they could actually lose to, but in a better-ordered state of affairs wouldn’t.  Michigan is giving 11.5 at Rutgers, and NC State is giving 5-ish hosting #21 Liberty, and let that sink in: among those four, Liberty is the one that’s ranked.  #Resist the #Reset.

The bettors wisely recognize that #20 USC (-3) at Utah is likely to be closer than it would seem on paper.  The Youths always play the Trojans tough.  This one could actually round your night off with some pizzazz if you want to stay up for it.

We bid an appreciative farewell to Div III following Merchant Marine’s most enjoyable victory over Coast Guard in their Storied Rivalry last week.  This one is the best kind of game, one in which we can’t really lose because we love Coast Guard too, as a fellow military academy.  Well done all. 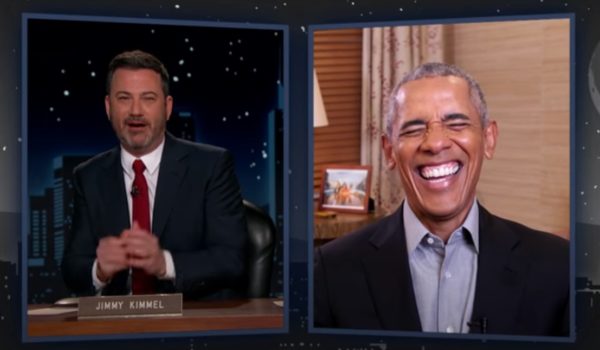