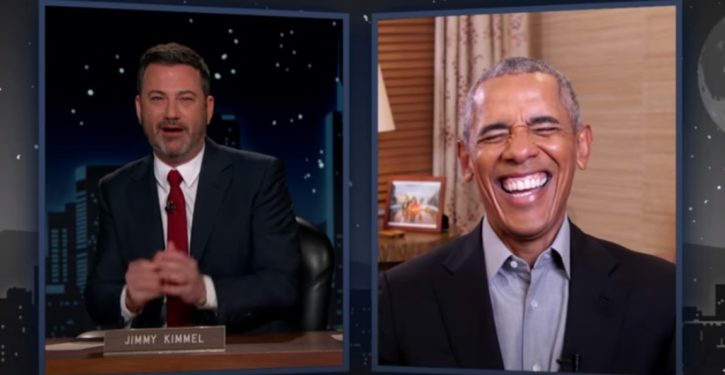 In what CBS refers to as a “light-hearted jab,” former president Barack Obama told late-night host Jimmy Kimmel on Thursday night that “we” could send the SEALs to remove President Trump from the White House.

Recounts CBS: “Jimmy Kimmel asked Mr. Obama what might happen if an unnamed person — presumably Mr. Trump — were trying to hide in the White House.”

Kimmel’s query ensues:  “You know the White House well. You lived there for eight years. Are there places someone could hide? Like, if, say, they were going to be removed? … There’s little cubby holes or anything we should know about?”

CBS delivers Obama’s response: “‘Well, I think we can always send the Navy SEALs in there to dig him out,’ Mr. Obama replied, laughing.”

The first question for Obama might be “What you mean we, Keemosabe?”  In the case of wanting to forcibly remove the president from the White House, who’s the “we” that would give an order to the Navy SEALs?

If that’s too heavy-hearted a reaction, perhaps we should switch to something like: well, that “joke” would be in keeping with Obama’s snarky and ad hominem approach to “criticizing” Trump.

An AP report in late October, for example, acknowledged that with the headline “Obama criticizes Trump in scathing, personal terms” to herald these gems:

“He’s still worried about his inauguration crowd being smaller than mine. It really bugs him. He’s still talking about that. Does he have nothing better to worry about? Did no one come to his birthday party as a kid? Was he traumatized?”

Continuing the personal theme, AP wrote: “Obama also dinged Trump on his masculinity. Without mentioning the president directly, Obama said that ‘kindness, humility, responsibility, helping somebody else out’ used to be ‘the definition of manliness. Not strutting and showing off. Acting important and bullying people.’”

But maybe that’s too heavy-hearted too.  How about: Obama couldn’t be bothered to find some SEALs to go to Benghazi on 9/11/2012, but now wants to send them into the White House?

Probably too heavy-hearted.  Try this: Obama will joke about sending in the SEALs to boot Trump out of the White House, but won’t even entertain the notion that there are major questions about the vote in at least six states (where numbers quite literally don’t add up), and addressing those questions – not ignoring them – is the path to certifying an electoral outcome that would be compelling on President Trump.

It’s what was done for candidate Al Gore in 2000 – with patience and fairness on the part of Republicans, if not always with good grace.

Darn it, it’s hard to avoid reacting in a heavy-hearted way on this, as if it matters whether we follow the law in holding and certifying our elections.  Social pressure isn’t a quantity prescribed by law to determine what outcomes we accept.  If hundreds of witnesses have signed affidavits recounting what they see as real concerns about the vote, the law doesn’t say we’re supposed to ignore that and go with the outcome being urged on us by the self-appointed cool kids instead.

Even social pressure enlivened by light-hearted jokes about using military special forces to raid the White House has no legal compulsion on us.  If you want Americans to have no reason to cooperate with their government — to see it, rather, as illegitimate — mounting a social pressure campaign against due process of law, by deploying snarky jokes, is a really good way to convince them.  Government, they’ll logically conclude, is a big con being weaponized against them and joked about by ex-presidents.  Ignore it.  Ignore its laws.  After all, ex-presidents do. 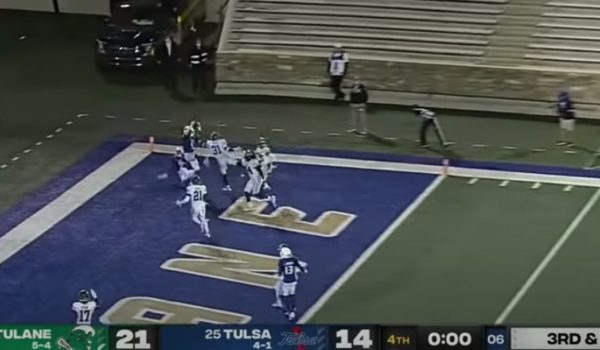