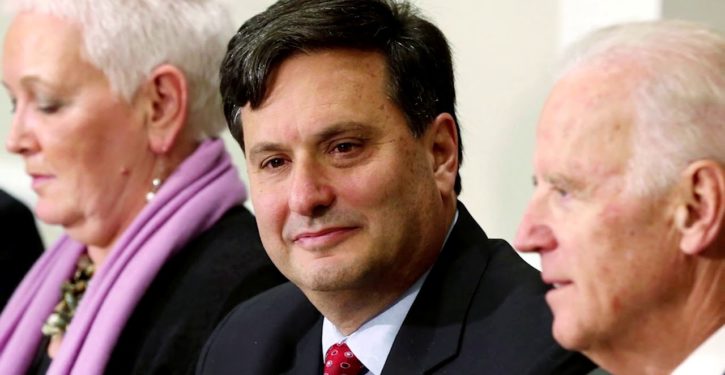 Joe Biden has barely begun the task of staffing his cabinet, but he’s already off to a bang-up start. One of the advisers for his coronavirus task force, Ezekiel Emanuel, is on record as saying the the vaccine should be administered to the neediest groups last, while another — Michael Osterholm — is pro-lockdown and has opined that wearing masks is “nonsense.”

But no pick is more baffling that Ron Klain, Biden’s selection for White House Chief of Staff. Klain was a Biden aide when the fledgling Obama administration found itself battling “the Spanish flu — the deadliest pandemic in U.S. history,” according to Politico. Biden has boasted his and Barack Obama’s deft handling of that crisis. But Klain had a different view of the situation:

It is purely a fortuity that this isn’t one of the great mass casualty events in American history. It had nothing to do with us doing anything right. It just had to do with luck. If anyone thinks that this can’t happen again, they don’t have to go back to 1918, they just have to go back to 2009, 2010 and imagine a virus with a different lethality, and you can just do the math on that.

He has also countered the media narrative that Donald Trump did not act swiftly enough in response to the current pandemic. On February 11, Klain stated that the Trump administration’s actions were “far from doing nothing.”

Another bone of contention between Biden and Klain is the latter’s view expressed in 2014 that elections are rigged.

Responding to a Vox article with the headline “68% of Americans think elections are rigged,” Klain tweeted, “That’s because they are.”

Klain has also praised China’s authoritarian government for its response to the coronavirus pandemic, heralding the fact that it “built hospitals in two or three days.”

This is far from the first time that Biden and members of his campaign have praised China. pic.twitter.com/0QkKRqxjqP