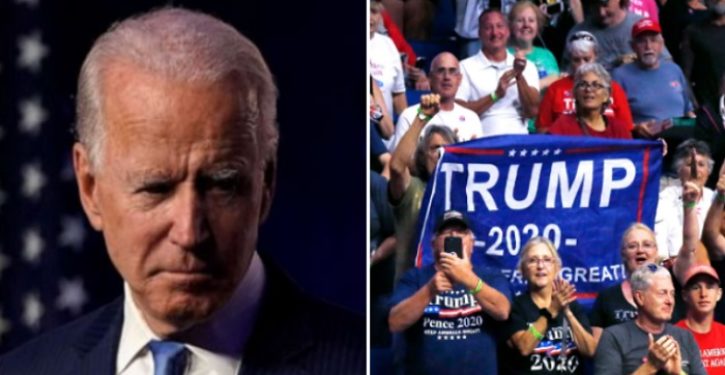 Reports have surfaced that officials involved in the planning of Joe Biden’s inauguration are concerned his supporters won’t show and they’ll be “left with a mass gathering” of “chumps” and “ugly people.” Those are the names the man who claims to be all Americans’ president conferred on Trump supporters who heckled him at campaign stops.

Daily Beast politics editor Sam Stein published a column in which he discusses the tiptoeing necessary to conduct an inauguration in the age of COVID.

Stein notes that Biden’s previous campaign events were made sparse by design, something that could cause logistical nightmares on January 20th.

The report cites one “official” who is concerned that a “MAGA rally” could break out, which very well could happen: A recent poll found that only 56% of Biden voters say they were voting for him rather than against Donald Trump.

“What do you do if our people don’t show up and his do?” the official, who is involved in inaugural preparations, asked. “They probably will and the last thing you want is a MAGA rally on the Mall when Joe Biden is sworn in as president,” they continued. “I think [Trump] would want to make it as much of a sh*tshow as possible.”

NEW: Biden inauguration planners are dealing with a logistical nightmare. Not just grappling with the threat of COVID but also fearing that if their own people don’t show up to celebrate, Trumpers will fill the void with heckling and protestshttps://t.co/rDY89pfOd7

A MAGA Rally at Biden’s Inauguration?

Inaugural planning will go on despite the president’s campaign refusing to concede the election as they pursue litigation in states in which some ballots are in dispute.

WATCH @seanhannity: "70% of Republicans don't believe this election was free, fair – and for good reason!" pic.twitter.com/lEjJW2lIKs

The passion for the president’s fight is reflected in his supporters.

Biden’s people know it, and they’re concerned the MAGA crowd is going to show up on Inauguration Day in full force. This has led to speculation that Biden could go into hidin’.

One Democratic fundraiser told the Daily Beast that they could foresee “a mostly virtual event,” while Democratic operative Stephanie Cutter has suggested Biden wouldn’t even need to go to the Capitol. “It is all ceremonial,” she said. “You can do it in the [Capitol] rotunda if you want. You just have to be sworn in by a Supreme Court justice.”

MSNBC guy says Biden camp is terrified that a Biden inauguration would turn into a Million MAGA march …. https://t.co/6ROqTfHdHq

This Could Prove to Be an Embarrassment

If the only requirement is a Supreme Court Justice to swear him in, why not just send John Roberts to Biden’s basement?

We can guarantee there are no MAGA fans there and it’s certainly a safe environment that the presumed president-elect is used to.

If 77 million people actually voted for Joe Biden–why is his campaign worried about being trolled at his inauguration?

Funny how, after an election that was solely about President Trump, that the inauguration would be more of the same.