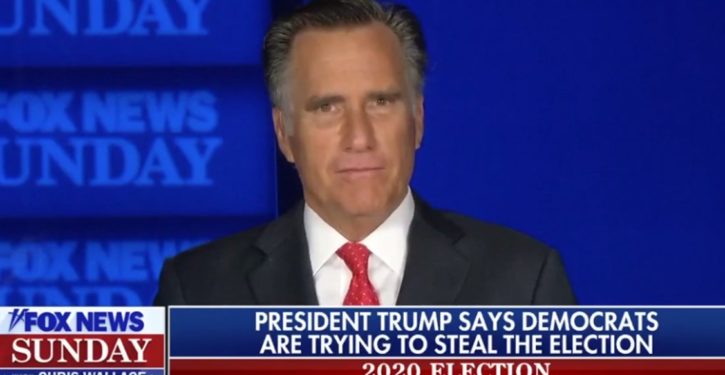 The headline used by Fox (which reads, exactly: “Sen. Romney on Trump legal action: It’s important for democracy that we don’t allege fraud”) shortchanges what Mitt Romney actually says by just a little bit.  So I want to make that clear at the outset, lest we waste time going down rat holes about whether Romney’s point got a fair shake.

Romney was speaking to Chris Wallace on Fox News Sunday, and Wallace asked him how President Trump had “gone far over the line” in speaking to the public about allegations of fraud in the election.  Here is what Romney said (video below):

Well, I think it is appropriate for the president to make sure that the, uh, vote count has been done properly, to carry out recounts, where it’s a very close contest … if there are any irregularities alleged, uh, to pursue those, and to follow every legal option he has.  That’s what you’d expect of a president in a setting like this.

At the same time, I think it’s important to choose one’s word carefully, because the eyes of our children are upon us … uh, the eyes of the world are upon us.  Every nation in the world is watching what the president of the United States says.  And there’s a battle going on around the world between authoritarianism and freedom, and it’s important for the cause of democracy and freedom that we don’t allege fraud and theft and so forth unless there’s very clear evidence of that.  And at this stage, that evidence hasn’t been produced.

Wallace then put up some text Romney tweeted out in the past week, criticizing the president for his rhetoric on the election and its vote-counting aftermath.

I do think it’s important for the American people to understand that we are a nation of laws, that we allow for recounts, that we investigate irregularities, and that these things go to the courts, and the courts make a fair and impartial decision.

That’s essential, for our nation to have confidence in our institutions, and for people, as I’ve indicated, around the world to recognize that democracy works. Uh … saying something other than that would only be cheer [?] for the Russians and the Chinese and those that want to bring down freedom and bring down democracy.

So, pursue every legal avenue – and that’s what the president will do, but I think it’s important for all of us to hold our breath a bit, to calm down a bit, uh, and not to use language that’s so inflammatory that it will make people angry and people who are not watching carefully feel that somehow, something has been rigged, and that’s simply – there’s simply no evidence of that at this stage, and we’ll see whether there is down the road, but that’s – that’s for time to tell.

That is a full read of Romney’s own words.  As we see, he acknowledged the president’s obligation to ensure “irregularities” are looked into.  So it isn’t the case that he says they must be ignored, and it’s not the argument of this article that Romney says any such thing.

But Romney does say there shouldn’t be allegations of fraud or theft.  He also says something else very important.

Prejudicial language for me, but not for thee

He says “there is simply no evidence” at this stage of fraud or theft, or the election being rigged.  He’s quite emphatic about that, and Chris Wallace joins him in emphasizing it, stating in verbal boldface that Trump’s allegations in this regard are “unsubstantiated.”

I want to make just a couple of points about this exchange, and the comments of others who are trying to get Trump to stop saying “fraud” and “stealing the election.”  For what it’s worth, the way I’d put it myself is “potential fraud.”  I might speak of investigating a “potential attempt to steal the election.”  I’d use the words, but not speak as if we have a common verdict at this point on whether they apply.

I don’t know that Romney and Wallace would find that acceptable.  Because – and here’s the first point – it’s clear that they want to prejudge the validity of evidence, and claim – incorrectly – that there is no evidence of fraud or election theft.  It is obviously the message they want to resonate: that “there’s simply no evidence.”

So they get to prejudge the facts, whereas the president doesn’t.  We could spend all day talking about who should get to prejudge what; I’ll just leave that one there as food for thought – e.g., about why Trump feels it necessary to speak trenchantly and without caveat to frame his message.

Why the words matter, especially to presidential candidates

The other point is less rhetorical than what we may call operative.  In other words, it’s a point that governs what we can do, or what direction we take things (as opposed to what we persuade people to think).  And it’s this: if we can’t talk about “fraud” or “theft,” then even the president is very limited in what he can justifiably do about “irregularities” in an election.

The reason you can investigate voting irregularities under compulsion, and not just if the authorities of a jurisdiction happen to feel like letting you investigate, is that the law may have been broken.  Irregularities can happen just because people are stupid or careless, or lightning strikes or power goes out or chads get dimpled or something like that.  We’d like to think that state and local election authorities would always choose in good faith to investigate the things that don’t strike us as on the up-and-up.  But they don’t always choose to do that.

Nor are they always amenable to outside, third-party inspection or monitoring.  We’ve seen that in spades since Tuesday 3 November, in Pennsylvania and Michigan at the very least.  We’ve also seen it in previous elections (e.g., between the county and state level in Broward County, Florida in 2018).

If a state governor and/or legislature wants the polling venues and mechanisms wirebrushed, with nothing moving and no one taking things out emergency-exit doors, they can make that happen, just because they say so.  They own the process and the assets necessary for the task.

But if they don’t act, the ultimate outside party – a presidential candidate – has to identify a law that’s at issue: one that may have been broken.  An excellent post on Saturday at RedState breaks this down, for an affidavit about alleged backdating of mail-in ballots in Michigan, which has reportedly prompted an FBI investigation.

And what is the federal law that underlies that FBI investigation in Michigan about?  It’s about vote fraud.  It’s not about whether election workers were told to violate workplace procedures, or even how those procedures relate to state law on the handling of mail-in ballots.  It’s about whether the alleged activities described by the witness would reasonably produce vote fraud.

It’s on the basis of violations of federal law that the FBI can be sent in by federal authorities.  In some instances, potential violations of law may also be the basis for lawsuits being brought (a way to bring it to a judge’s attention if the FBI’s not interested).  Those violations have names.  “Fraud” is a prominent and encompassing one.

“Fraud” may sound freighted and incendiary, but it’s what the federal statute in Title 52 speaks of.  To allude merely to “irregularities” is prejudicial language that can – if we want it to – take a presidential candidate’s options off the field.  “Irregularities” are the province of the vote administrators: the states, the counties, the local election boards.  It’s violations of law that give a presidential candidate or a national political party standing to get supervening action from the federal level.

I wouldn’t expect Democrats to sit still while a Republican-run state stonewalled their efforts to get an open-doors, open-books investigation of voting “irregularities.”  I’d expect them to leverage federal statutes, if necessary, to compel cooperation within the state.

And there’s no reason why Republicans shouldn’t do the same.  Moreover, if the allegation is that election workers were being told to backdate ballots, that quite obviously is not a mere procedural violation.  It is obviously fraud.  It’s intentional, if a supervisor tells you to do it, and it’s meant to defraud the public of a lawfully conducted election.

The evidence in an affidavit must of course be investigated and sifted by a court.  But what fundamentally makes it due process is that investigators are constrained to pursue evidence as it relates to the elements of a defined crime.  That’s what makes it not a mere fishing expedition.  And there is no protocol in any realm of endeavor which dictates that we may not utter the name of the crime the evidence relates to until the crime has been proven.

I note, moreover, that computer forensics can often prove that things done with information technology were done intentionally, and not merely by accident.  So dismissing the entire field of digital “glitches” with the vote, as something we can’t discern fraud in, is unwarranted.  It’s unwarranted to assume that manifestations from computer operations are not intentional fraud, as much as it’s unwarranted to assume that delivering ballots in assorted private vehicles at 3:30 AM is not an indicator of intentional fraud.

The point is not that these indicators don’t require investigation and processing in court, if we’re to draw conclusions and make decisions based on them.  Of course they do.  The point is that if we aren’t allowed to frame them as the markers of a crime, there are situations in which they will never get that investigation or that day in court.

Final observation.  It’s a matter of opinion, of course, but in mine, it is far better for democracy if we don’t fear to speak about the dangers of voting activities that are or appear to be fraudulent.  Democracy isn’t harmed by nouns that convey the gravity of acts.  Rather the reverse: consensual government is submarined over and over again when we adopt social protocols that keep us from naming clearly what things are.

What Romney refers to as “democracy” depends on recognizing common-sense truths.  An irregularity is something like a hanging chad.  Election supervisors telling workers to backdate ballots is evidence of a crime.

We don’t paper the potential for crime over in a democracy.  We have a process for proving it to our common satisfaction.  But that process requires, precisely, facing it squarely and calling it what it is, without succumbing to chaos or hysteria.  A people who can’t do that can’t handle democracy in the first place.  Americans can.  If the eyes of the world are watching us, the best thing they could possibly see is that.

WaPo’s Jennifer Rubin: ‘We have to collectively burn down the Republican Party’
Next Post
Biden planning executive orders to reverse many of Trump’s policies