Democrat nominee for President Joe Biden asked Americans whether or not they believe he is as radical as President Trump’s campaign is trying to portray him.

The 77-year-old candidate emerged from his basement long enough to make a campaign stop in Pittsburgh Monday, seeking to combat the narrative that he would simply be a puppet for far-left Marxist zealots in his own party.

“Do I look like a radical socialist with a soft spot for rioters?” he asked. “Really?”

Perhaps it isn’t so much a question of Biden’s radical malafides but whether he has the gumption to stand up to people like Kamala Harris, Alexandria Ocasio-Cortez, or Beto O’Rourke – all whom he has announced will have some role in his administration.

That aside, people like Barack Obama and Bernie Sanders certainly think Biden is radical. Their words prove it. Biden’s words, for that matter, prove it as well.

Biden: "Ask yourself: Do I look like a radical socialist with a soft spot for rioters?" pic.twitter.com/3N9YLry5FY

Why Yes, You Do Look Like a Radical Socialist

In July, former rival Sanders, fresh off the release of a “progressive unity platform” that put forth “a good policy blueprint that will move this country in a much-needed progressive direction,” bragged that Biden might be the most progressive President in modern times.

The Vermont senator boasted that he had forced Biden to adopt many of his radical socialist policies.

“The compromise they came up with, if implemented, will make Biden the most progressive president since FDR,” Sanders announced.

Socialist Sen. Bernie Sanders brags that the policies Joe Biden has adopted “will make Biden the most progressive president since FDR”https://t.co/Ej6m1Jqv7F pic.twitter.com/R2YwLo20kX

A little over one week ago, former President Obama confirmed that Biden is simply a vessel of the radical left. In an interview with “The New Yorker” Obama admitted, “If you look at Joe Biden’s goals and Bernie Sanders’s goals, they’re not that different, from a forty-thousand-foot level.”

He then proceeded to reel off several similarities between the two candidates.

“What I think the moment has done is to change some of those calculations, not because necessarily Joe’s changed but because circumstances have changed,” added Obama.

In other words, our party has shifted far to the Left, and Biden has adapted by bending at will.

In an interview, the New Yorker asked Barack Obama how he interprets Biden’s swerve to the left. “If you look at Joe Biden’s goals and Bernie Sanders’s goals, they’re not that different, from a forty-thousand-foot level,” he argued. https://t.co/UYZGOf2a16

Biden himself has made an apt argument to suggest he is a radical socialist, something he has to do in order to inspire the Democrat party’s base.

Some of the extreme positions in which Biden and Bernie share commonality include:

The unity platform hinted at implementation of the Green New Deal and reparations for slavery.

And then there is this:

Remember, this is a man who on Independence Day warned that he would “transform” the country.

Your campaign also paid to bail out violent rioters with criminal records!

Don’t believe Bernie, Barack, or even our fact-based analysis? Then, by all means, check out Joe Biden’s own words in which he answers the very question he posed to Americans on Monday.

Joe Biden: “If I’m elected and this passes, I’m going to go down as one of the most progressive presidents in American history”https://t.co/dBYLmVOh6i pic.twitter.com/7EYCZhjCxw

“If I’m elected and this passes, I’m going to go down as one of the most progressive presidents in American history,” Biden said.

There you have it, straight from the horse’s — er… mouth. 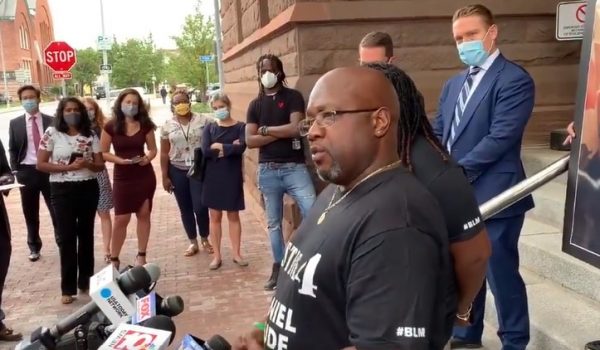 Rioting in Rochester, NY after release of video of black man suffocating as police try to restrain him
Next Post
Biden accidentally reads instruction from his staff as part of scripted answer for TV interview