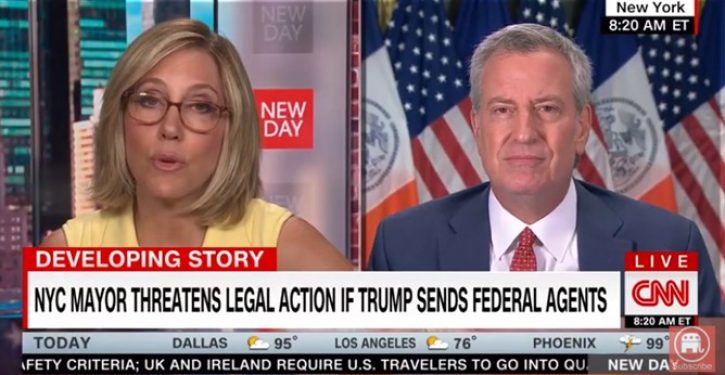 There’s no denying it: Violent crime in New York City is up. As the table below shows, shootings are up 130% over last year at the same time, while burglaries, auto thefts, and murders are up 118%, 51%, and 30% respectively.

The table was displayed on CNN’s “New Day” on Thursday. The city’s mayor, Bill DeBlasio, was invited on to discuss the crime surge.

But unbeknownst to him, the interview was a setup. After the table with the crime stats appeared on screen, host Alisyn Camerota displayed a second statistic, prefacing it with the comment “But then this next graph [sic] is really interesting: The NYPD arrests down 62%.”

Then came the challenge: “Just explain this paradox, mayor.” To this de Blasio replied, ” There’s a pandemic going on. … For months we had a lot fewer officers ’cause they’re out sick.” Watch:

But it appears “hizzoner” overlooked a couple of important variables. Such as his plan, announced on June 8, to divert funds from the NYPD toward youth programs, which he concretized on June 30 with the announcement that he would be slashing $1 billion from the department’s $6 billion budget. Or his brainstorm, shared on June 22, to disband the force’s plainclothes anti-crime unit, which was greeted with an instant surge in shootings.

De Blasio’s excuse for the sharp rise in violent crime in June is accurate. There are fewer police patrolling the streets of New York. It is the reason that there are fewer police that catches him in his latest demonstration of how not to be the mayor of a major urban center.

Access to COVID-19 vaccine may be restricted based on race, if panel has its way
Next Post
Protesters vandalize Oakland mayor’s home. She accuses them of ‘terrorism’