Federal agents and Kenosha, Wisconsin, police officers arrested nine people in a dramatic scene that was filmed at a traffic stop Wednesday.

The Kenosha Police Department received a citizen tip on Wednesday evening that there were several suspicious vehicles with out of state plates congregating in a Kenosha parking lot, the department said in a statement Thursday. With the help of the U.S. Marshals Service, police located the vehicles and set up surveillance following them to a gas station, the statement said.

“Suspecting that the occupants of these vehicles were preparing for criminal activity related to the civil unrest, officers attempted to make contact and investigate,” the statement said. (RELATED: Jacob Blake Told Police He Had A Knife, Wisconsin DOJ Says)

The individuals in the group’s bus and bread truck were detained, but individuals in a third vehicle, a minivan, attempted to flee, according to police. Police then stopped the vehicle and “forced entry” to the van whose occupants were then arrested, an incident that was caught on film.

Riot Kitchen HQ just learned that our bus crew was arrested in broad daylight in #Kenosha today – kidnapped by feds in unmarked vans.

We are currently trying to find our friends who were just there to feed people.

Please share and donate for bail via Venmo riotkitchen206 pic.twitter.com/o2TDbohvFl

The arrested individuals appear to belong to Riot Kitchen food truck, a mobile kitchen that provides food to protesters free of charge, according to the group’s GoFundMe page. Riot Kitchen formed in June following the death of George Floyd who died in Minneapolis police custody after an officer kneeled on his neck, video shows.

The group built a kitchen in the Capitol Hill Anonymous Zone, or CHAZ, which was an area that protesters occupied in downtown Seattle, Washington, their GoFundMe page said.

On Saturday, the group tweeted a photo of a caravan of vehicles saying that they were on their way to Washington D.C. for Friday’s “Commitment March: Get Your Knee Off Our Necks.” The protest was organized by civil rights leader Rev. Al Sharpton’s National Action Network.

“The past 30 hours or so, I’ve slept a total of 3 hours and it’s been nothing short of an alternate reality. While the world is doing normal things, I’ve been trying to find people missing, disappeared by police, figure out how to pay bond from afar and get them out safe,” tweeted Jennifer Scheurle, a Riot Kitchen leader.

Scheurle said the crew was there to feed protesters and have done “nothing but good for people” in another tweet.

Police recovered helmets, gas masks, protective vests, illegal fireworks and suspected controlled substances, according to the department statement. The individuals were arrested for disorderly conduct and have yet to be charged by the Kenosha County District Attorney.

Protests and riots have occurred in Kenosha following the police shooting of Jacob Blake, who remains paralyzed, according to his father.

The U.S. Marshals Service, the Kenosha Police Department and the Kenosha County District Attorney’s Office did not immediately respond to the Daily Caller News Foundation’s requests for comment.

Illegal retaliation at Sandia Labs for opposing reverse discrimination?
Next Post
When it comes to the spread of COVID, Orange Man bad, black man good 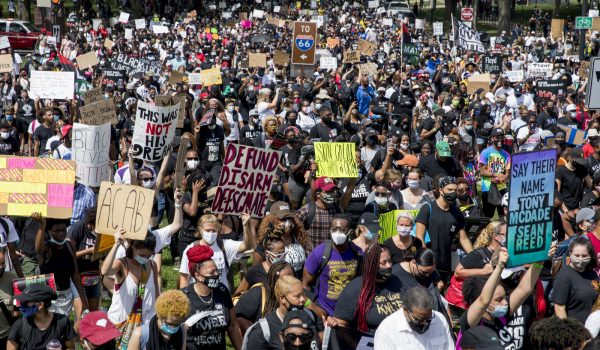