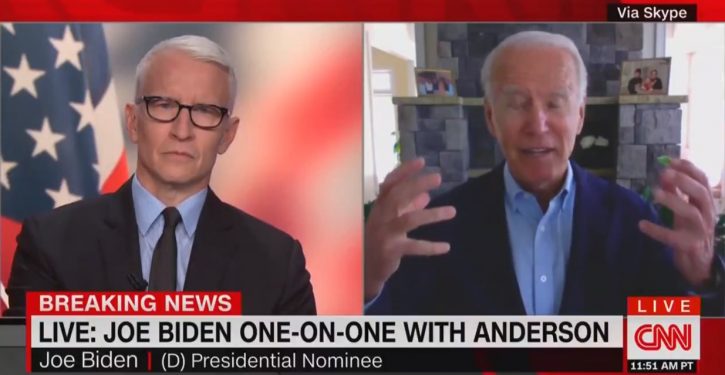 If you haven’t been following Democratic nominee Joe Biden’s progress in the presidential race, he has moved up. Not in the polls, which have revealed a one-point decline in his standing owing likely to the RNC. Rather, he has ascended from the basement of his Wilmington, Del., home to what appear to be the main floor — that or he is now broadcasting episodes of the “Joe Show” from another property he owns.

Speaking of which, he sat for another interview with CNN yesterday, this time with anchor Anderson Cooper, who typically lobbed the former vice president nothing but softballs. Here he is, for example, asking Biden why he thinks Donald Trump hasn’t yet spoken out on the shooting of Jacob Blake. It’s tantamount to asking Biden to explain yet another way in which he is vastly superior to his opponent in character.

One way in which he is clearly not superior is exhibited in his declining capacity to connect names and faces, yet another symptom of his growing dementia. In this instance, he confuses Blake with Kyle Rittenhouse, the 17-year-old who has been accused of  shooting and killing two “protesters” in Kenosha.

Poorly worded question from Anderson Cooper for sure, but here's the full back and forth for those asking for additional context: pic.twitter.com/o2l0jrPqZl

Conservative journalist Caleb Howe, who posted the initial video to Twitter, posts a second, which, as he notes, provides additional context. But as you listen to Biden speak, pay close attention to his fanciful characterization of Unite the Right, the group that organized the neo-Nazi rally in Charlottesville in 2017: “People comin’ out of the woods carrying torches, their veins bulging.” Where does this come from? Could his writers be dreaming up this drivel?

Yes, by the way. Biden uses the question he thinks he was asked to harp once again on Charlottesville, reprising the lie that Donald Trump called the white supremacists “very fine people.”

Anderson Cooper, for his part, sits with an expression of dismay on his face listening to the septuagenarian ramble on. He tries a couple of times to steer the conversation back to the question he asked but to no avail. 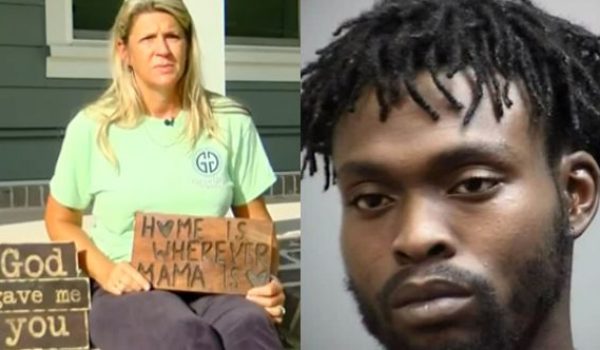 College co-ed, stepfather fatally shot in head following fender bender
Next Post
How to explain white privilege in terms simple enough for a child to understand