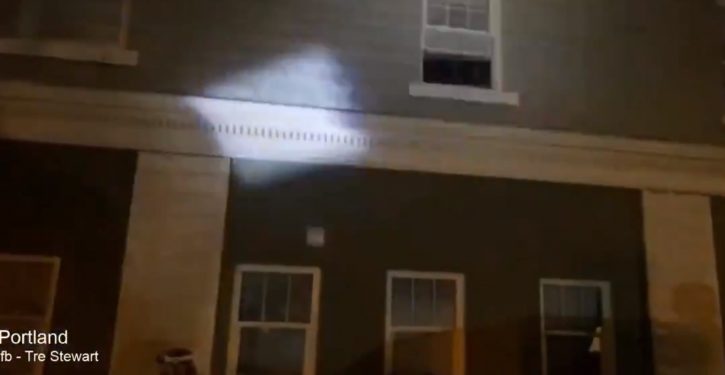 On Saturday, domestic terrorists with Antifa/BLM (aka Joe Biden’s base) made their way to a residential area in Portland where they proceeded to terrorize and threaten the lives of average people who simply wanted to get some sleep.

“As Antifa have taken to Portland residential areas to riot, they’ve also assaulted & intimidated residents there,” Post Millennial editor-at-large Andy Ngo wrote on Twitter. “Tonight, they threatened those who looked out the window.”

That’s right. People who simply looked out the window to see what all the commotion was about are now targets for death threats by the low-information Marxists that have taken over the streets, thanks to the city’s feckless and ineffective mayor, Tom Wheeler.

“We’re gonna burn your building down,” the terrorists declared. “We know where you live.”

“We’re gonna burn your building down”

“We know where you live”

As #antifa have taken to Portland residential areas to riot, they’ve also assaulted & intimidated residents there. Tonight, they threatened those who looked out the window. #PortlandRiots pic.twitter.com/1qiIOLk99j

The incident follows the federal government’s pull-out of Portland, which has prompted far-left activists to move on to other parts of the city beyond the federal courthouse, where they congregated every night for the past two months.

During Saturday’s protest, Antifa also attempted to set fire to another police building.

But wait: Weren’t we told by Wheeler that this was all due to the presence of federal officers protecting federal property? Of course, we all knew this was absolute hogwash, and naturally, the lunatics and terrorists in the mob proved us right.

.@tedwheeler should face charges of violating the rights of the citizens of Portland, additional charges for every night he allows these #Devolutionaries to intimidate and threaten the citizens with impunity

Why is this allowed?

If I walked through my neighborhood at night with a flashlight and was pointing it into windows I’d expect to be shot or the police called or both.

Why do these domestic terrorists get a pass?

Good question. The answer to that is simple. It’s called “liberal privilege.” Despite his tough talk, Ted Wheeler has essentially given these mobsters and terrorists carte blanche to do what they want. (RELATED: Manhattan DA drops felony charge against BLM leader accused of injuring NYPD cop)

Vermont police collected DNA to help ID man who committed crime. What did the man do?
Next Post
Polling question that needs to be asked: Can you cast a vote for Joe Biden without holding your nose?