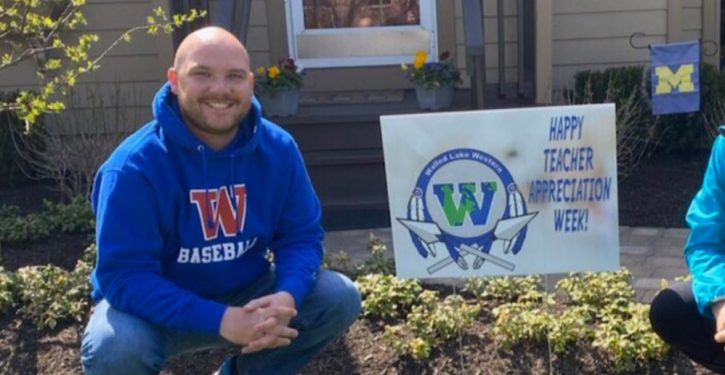 It’s come to this. Now you can lose your job for essentially stating a fact.

That is what happened to 28-year-old Justin Kucera, a social studies teacher and varsity baseball coach at Walled Lake Western High School in Walled Lake, Mich. on Twitter: “I’m done being silent,” Kucera wrote. @realDonaldTrump is our president. Don’t @ me.”

I’m done being silent. @realDonaldTrump is our president ❌🧢

Newsweek reports that a few days after posting the tweet, Kucera received an email from school officials asking him to attend a private meeting via Zoom. He is quoted as explaining:

I was required to meet with [Human Resources], the superintendent, and my principal [on July 10]. They initially took my statement on why I tweeted those tweets and they told me they would have a decision about my future employment in the upcoming days.

Three days later, Kucera was told he could resign or be fired. When Newsweek reached out to the district for clarification on Kucera’s apparent dismissal, they cited “confidential personnel matters.”

Bear in mind, Kucera didn’t share his “controversial” statement directly with students. He presented it in a public forum. More importantly, he didn’t share and unpopular opinion. It was an unpopular fact. Donald Trump is the president of the United States, whether the Walled Lake Consolidated Schools likes it or not.

Of his tweet, Kucera has said, according to the Washington Free Beacon, “I know a lot of people are just rooting for Trump to fail, and I don’t think that anybody should do that. Agree with him or not, you should want the president to do well. I apologized that [my tweet] brought so much negative attention, but I’m not sorry for what I said.”

There is no mention in either article of a lawsuit, though it seems on its face as though Kucera has grounds for a First Amendment action against the school district.

NYPD clears out Occupy City Hall encampment … on orders of who?
Next Post
‘Anti-racism’ is racism in disguise