This is precisely why trust in the media is at an all-time low.

Andy Ostroy of Medium posted a video showing horrific police brutality and wrote, “Anyone who can’t understand how Hitler got his citizens to commit atrocities…and think it can’t happen here…just watch. This is some seriously terrifying police brutality that 6 months form [sic] now could be a whole lot worse…”

Anyone who can’t understand how Hitler got his citizens to commit atrocities…and think it can’t happen here…just watch. This is some seriously terrifying police brutality that 6 months form now could be a whole lot worse… pic.twitter.com/sB5XbHjEUm

The footage really is horrific. No one wants to see law enforcement administered that way in our nation.

Which is precisely the problem with the clip. Despite the author’s clear implication that it was shot in the U.S., it was actually filmed in Serbia, date undetermined.

In the thread following his tweet, Ostroy was asked where and when this video is from. His answer is as revealing as it is wrongheaded:

The location was/is irrelevant. The fact that it's the same kind of brutality we're seeing here, & that it's escalating into secret goon squads taking orders from a sociopath demagogue, is the point. It's not such a stretch from this to the next stage…just as in 1930's Germany

No, the location is not irrelevant. His reason for posting the video in the first place was to underscore the kind of excessive force that is supposedly occurring on American streets. If that wasn’t his motivation, why post the video at all? Most followers of the news are aware that police brutality is a daily occurrence in some parts of the world, including China, which Democrats of late have been shilling for.

More than one Twitter user fell for Ostroy’s bait and wrongly assumed this to be the U.S.

This is absolutely blowing my fucking mind. I can't believe what I am seeing on the streets of my country.

Trump, Barr, every last one of his people need to be charged, convicted and thrown into prison. This is insane.

Further down in his tweet-turned-debate, Ostroy quadruples down on his original argument by positing that “we’ve witnessed the same kind of brutality on our own American streets.” The statement is true, but only if we extend the class of brutalizers to include Antifa and BLM. 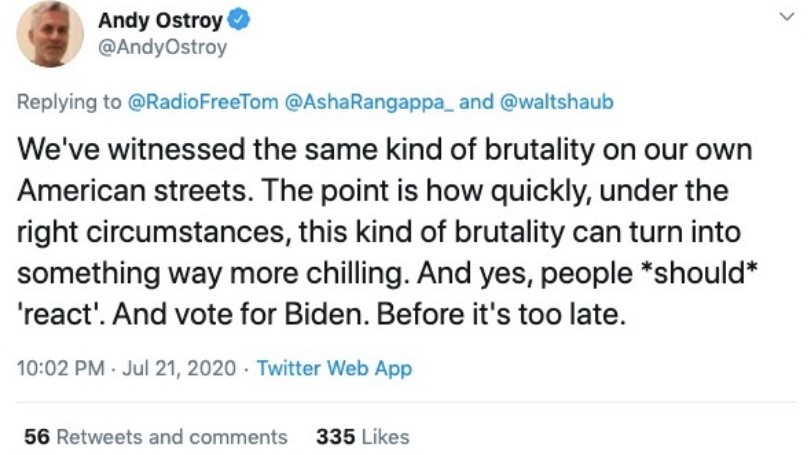 Note incidentally that Ostroy tips his hand in this last tweet, urging readers to “react” by voting “for Biden. Before it’s too late.”