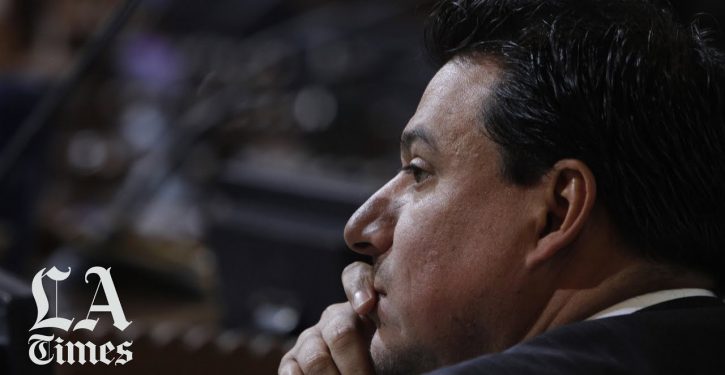 The Trump administration loaned between $4 million and $10 million in coronavirus relief funds to a real estate company whose chairman allegedly bribed a Los Angeles city councilman with nearly $260,000 in poker chips, escort services, and $600,000 in payments to settle a sexual harassment lawsuit.

Jose Huizar, the city councilman, was arrested on June 23 on charges that he accepted $1.5 million in bribes to help the developers of various real estate projects in downtown L.A.

A federal criminal complaint filed against Huizar said that a Chinese billionaire — identified in court filings only as “Chairman E” — provided the bribes to Huizar for help advancing a development project to build a 77-story skyscraper in Los Angeles.

The complaint does not identify the Chinese real estate company or its chairman by name, but the skyscraper project matches one proposed in 2018 by Shenzhen New World Group, a China-based conglomerate owned by Wei Huang.

The company submitted an application for the development project on June 7, 2018, according to documents filed with the Los Angeles Department of City Planning.

Court records show that on July 20, 2018, the FBI obtained a search warrant for communications involving Huang and his firm, which began doing business in California in 2010.

California business registration documents shows that Huang signed the articles of incorporation for both LLCs in 2010. Shenzhen is proposing to redevelop the L.A. Grand Hotel into a 77-story skyscraper.

The Treasury Department on Monday released a database of PPP loan recipients, showing that both of the LLCs received between $2 million and $5 million each.

The Treasury Department and Small Business Administration distributed $522 billion in loans to nearly 5 million businesses to help them businesses pay employees amid the economic downturn brought on by the response to the coronavirus pandemic.

The Daily Caller News Foundation received a loan under the program, as did multiple other news organizations.

Hotels have been hit especially hard by the coronavirus lockdowns, as business and personal travel has grounded to a halt.

While PPP received bipartisan congressional support, some lawmakers and government watchdogs have questioned whether the program will be a prime target for abuse given the urgency with which Congress passed the legislation that funded the paycheck program.

The Government Accountability Office, a government watchdog, said in a June 25 report that “the limited safeguards and lack of timely and complete guidance and oversight planning have increased the likelihood that borrowers may misuse or improperly receive loan proceeds.”

Borrowers of PPP funds are required on applications filed with the Small Business Administration to certify that they are not engaged in any activity deemed illegal under federal or state law. Applicants are also required to disclose whether they are the subject of any indictment or criminal complaint.

On Wednesday, federal prosecutors in Utah charged the owner of a trucking company with submitting fraudulent loan documents for a $210,000 PPP loan by falsely claiming he was not under federal indictment.

The complaint against Huizar, who has held office since 2005, alleges that the Chinese developer provided the bribes in part because of his position as chairman of the city council’s Planning and Land Use Management Committee.

“HUIZAR was poised to significantly benefit Chairman E’s desire and plans to redevelop Property E and transform it into a 77-story skyscraper, making it the tallest building west of the Mississippi River,” the complaint against Huizar says.

“This project would require official acts from HUIZAR at various stages of the City approval process.”

Huizar’s former aide, George Esparza, pleaded guilty on May 27 to racketeering charges as part of the probe.

According to Esparza’s plea agreement, he said that the Chinese developer began paying Huizar after he introduced a motion to keep the head of the Los Angeles Department of Building and Safety in his position.

Virginia Clark, who is listed as the point of contact on Shenzhen New World’s applications for the skyscraper, did not respond to a detailed list of questions about the PPP loans and the FBI investigation of Huizar.