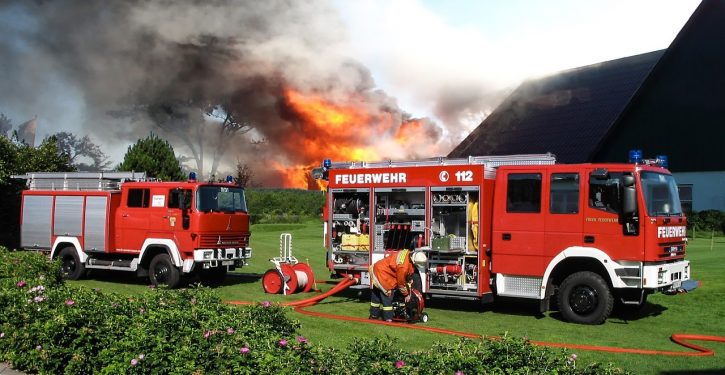 In 2014, a Berkeley, Calif. man experiencing difficulty breathing died after protesters angry over the death of Michael Brown blocked the ambulance sent to retrieve and administer first aid to him. In 2017, demonstrators in New Haven protesting the building of a wall on the southern border prevented an ambulance carrying a “critically ill” patient to Yale-New Haven hospital. As a result EMTs were required to perform an emergency medical procedure in the ambulance that would have been safer carried out at the hospital. In June, rioters set fire to home with child inside, then blocked firefighters’ access.

Which brings us current: Yesterday, marchers in St. Petersburg, Fla. protesting the death of George Floyd refused to step aside to allow a fire truck through on its way to a blaze.

According to Fox 13 Tampa Bay, the city’s police chief, Anthony Holloway, said he wants “to see people continue to protest but in a safe manner.” In other words, he wants them to clear a path for emergency vehicles.

But protester Raheem Fitzgerald says nothing doing. In the video below (beginning at 0:55), he can be heard telling reporters, “This is an escalation of force against us even though we are peaceful.” Asking him to show the simple courtesy of letting an emergency crew do its job is “an escalation of force”? Fitzgerald adds that “people who say they are ‘inconvenienced’ aren’t getting the message about racial injustice and police brutality in America”:

These people are more worried about turning left or right than they are about people’s rights becoming infringed upon.

Fitzgerald had better watch his mouth, not to mention his back. In 2017, exasperated lawmakers in North Dakota introduced a bill that would have made it legal to run down — and even kill — protesters blocking roadways. Three other states soon followed suit. George Floyd died 47 days ago, but protests show no sign of stopping. There has already been one fatality involving a protester who was run down by a car whose driver then fled the scene. How many more can we expect?